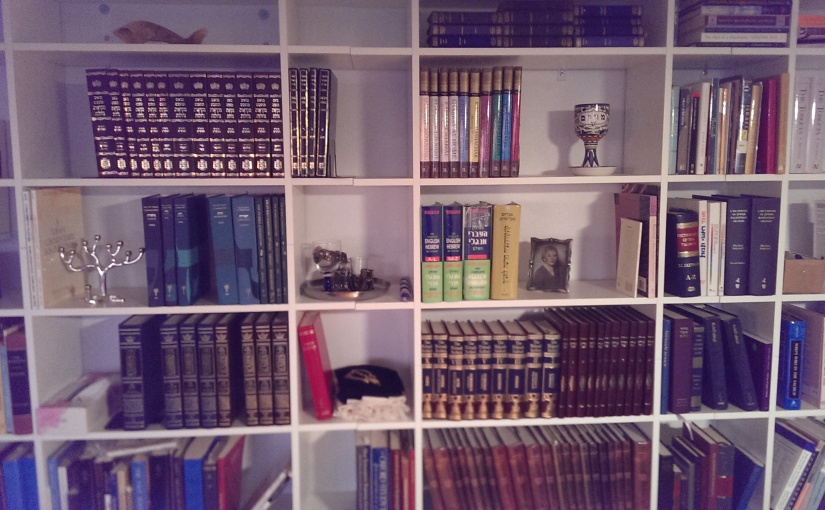 Image: My bookshelves at home. Photo by Rabbi Ruth Adar.

If you find this or any other article on this blog offensive, you have options! Check them out at Hack On, Hack Off.

Something I hear on a regular basis: “The Jewish Bible is just the Old Testament, right?”

No. And while I always chalk it up to ignorance, understand that it’s at best an ignorant statement. I’m sure you don’t want to sound ignorant or say anything offensive, which is why I’m writing this.

Jews don’t think of the Tanach (ta-NAHKH) as the “old” anything. It’s the library of canonical books we refer to as “The Bible,” or “Scripture.” It’s our collection of holy books, including the Torah, the Prophets, and the Writings (Psalms, etc.) We hold these books in deep reverence.

Referring to our Bible as the “Old Testament” suggests that there is a new, better edition out. That is what Christians believe, and in a Christian context, that’s fine. At a Christian Bible study, it’s fine. It’s not fine to say it in a synagogue: it is like going to a Buddhist event and referring to the participants as “heathens.” It will definitely mark you as someone who doesn’t know any better.

Also, the Jewish Bible IS different from the Old Testament portion of the Christian Bible. The two are organized differently. They have been translated differently. For instance:

Therefore the Lord himself shall give you a sign; Behold, a virgin shall conceive, and bear a son, and shall call his name Immanuel. – Isaiah 7:14, King James Version

Assuredly, my Lord will give you a sign of His own accord! Look, the young woman is with child and about to give birth to a son. Let her name him Immanuel. – Isaiah 7:14, Jewish Publication Society translation, 1985

That’s just one of the more famous examples of a difference in translation. There are many more of them.

So, when you’re talking about the Jewish Bible, call it that, or use the Hebrew term “Tanakh.” That’s one way to show that you have done your homework.

“Which Bible is best, Rabbi?” That’s usually how the question is phrased. Rather than talk about which is “best,” let me give you a quick lesson on which Bible is which, and you can decide for yourself.

The JEWISH BIBLE is different from the Christian Bible. The obvious difference is that there is no New Testament. Then if you compare tables of contents, you will also see that the two are arranged differently and that many Christian Bibles have more books, even after you take away the NT. Those books were included in an early translation of the Jewish Bible, but were not included when the Jewish Bible was finally set at 24 books in roughly the 2nd century of the common era.

For Jewish study and prayer, I strongly recommend a Jewish Bible.  It will be easier to use with the group, if only because the books will be in the same order and have the same names. The Jewish Bible is often called the TANAKH. That is an acronym of the words Torah [Teaching], Nevi’im [Prophets] and Ketuvim [Writings], the three divisions of the Bible.

Unless you read Hebrew, you will read the Bible in TRANSLATION.  The Jewish Bible is written in Hebrew, with a few short passages in Aramaic. No translation is perfect; every translation reflects choices by the translator.  If you want a really good idea of what the text says, you will have to learn Hebrew. Next best thing is to check a couple of different translations when you are wondering about translation.  Here are some of the most common ones:

New Jewish Publication Society Version (NJPS or NJV) – This is the translation you will encounter in most liberal (Reform, Conservative, and Reconstructionist) synagogues. It was begun in 1955 and completed in 1984.

Old Jewish Publication Society Version (1917). Similar to the NJPS, but the English of the translation is evocative of the King James Bible. It is available online.

The Living Torah (1981). A user-friendly but still scholarly translation by Rabbi Aryeh Kaplan, an American Orthodox Rabbi. It is noted for its detailed index, footnotes, and cross-references.

Koren Jerusalem Bible – This is the first Israeli translation of the Bible into English. (It should not be confused with the Catholic Jerusalem Bible, which is a completely different thing.) The Koren Bible is distinctive in that proper nouns, names and places are transliterated and not Anglicized.

Art Scroll Tanach – Mesorah Publishing issued the Art Scroll Tanach in 1993. The English translation is amended with explanations from Rashi and other commentators. It is a less literal but more traditional interpretation of the text.

There are also some notable modern translations of Torah (1st five books of the Bible)  and a few more books:

Everett Fox – This is possibly the most literal translation of the words in the Torah. To stay close to the Hebrew, Fox sometimes mangles the English. It can be a useful aid but I would not want this to be the only copy of the Torah in my possession.

Robert Alter – Alter’s translation, like Fox’s, hews close to the Hebrew, but with a more poetic ear.

Richard Elliot Friedman – published his translation of the Torah in the volume Commentary on the Torah, 2001.

If I had to answer the question above with a single title, I would say, “the Hebrew Bible.” (Then we could argue about which manuscripts, but I know that’s not what you mean.) If you are looking for a good Jewish translation of the Bible, each of the titles above have its advantages and disadvantages.  My advice is, get yourself a Bible, whichever one appeals to you, and then do your best to wear it out. The best Bible is the one you actually read.