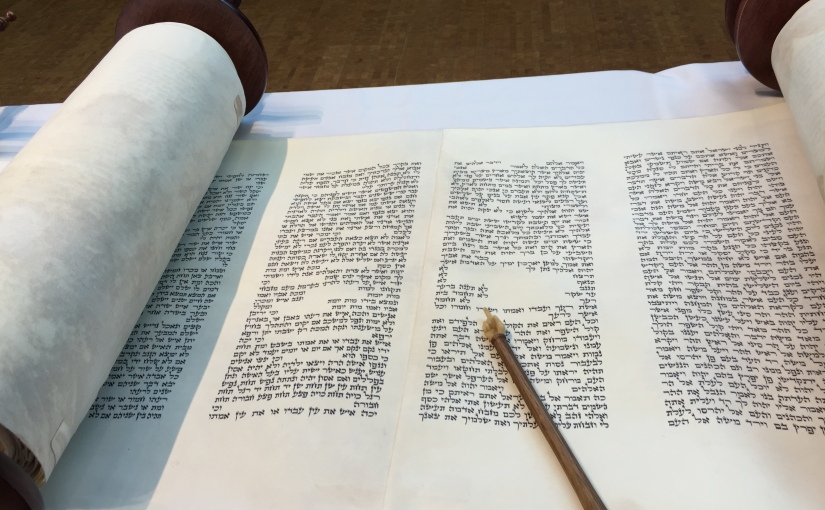 Photo of Torah at Parashat Yitro in Exodus. Photo by Susan Krauss, all rights reserved.

Jews have a whole vocabulary for talking about the Torah. One of the words that puzzles newcomers is parashah.

For starters, we say it a lot of different ways: pah-rah-SHAH, PAR-shah and sometimes par-SHAHT in front of another incomprehensible word. So here’s the deal:

The Torah is a huge scroll, and without divisions, it would be hard to locate anything in it. First, the Torah is divided into 5 books: Genesis, Exodus, Leviticus, Numbers, and Deuteronomy. Those are sometimes referred to as the Five Books of Moses. Those are their Greek names, by the way. The Hebrew names are Bereshit (buh-ray-SHEET), Shemot (sh’MOTE), Vayikra (vah-yee-KRAH), Bemidbar (b’meed-BAHR) and Devarim (d’vahr-EEM.)

Next, each of those books is divided into parshiot (pahr-shee-OAT.) Genesis has the most parshiot, at 12, Exodus and Deuteronomy have 11, and Leviticus and Numbers have 10. In the whole Torah, there are 54 Torah portions, or parshiot.

Torah portions are not the same as chapters in the Bible! Sometimes they begin or end with a chapter, but sometimes not. Chapters were actually the divisions made by Christian scholars, although they are so useful for finding things in the text that Jews use them today, too. Parshiot tend to be much longer than chapters, too.

In general, Jews read one Torah portion aloud every week in synagogue. ]However, the Jewish year is on a lunar calendar, so every few years we double up some of the portions, reading two in a given week. The schedule by which this is done is complicated. Most Jews just look it up on a calendar. If you’d like to see a list of all the Torah portions and their names, there is a good one at http://www.hebcal.com, a good online Jewish calendar.

Verses are an even smaller division of the Jewish Bible (and they are usually the same as in the Christian Bible.) In very old rabbinic literature, bits of Torah are not referred to by “portion and verse” but by a word or two of the verse. The ancient rabbis had the entire Torah memorized, so when they heard a few words of a verse, they knew exactly what was up for discussion! Today in a Torah study, we refer to chapter and verse, don’t worry!

Now, as for those words for portion that I mentioned earlier: pah-rah-SHAH is the Sephardic or Modern Israeli pronunciation. PAHR-shah is the Ashkenazi pronunciation (these are different ways of pronouncing Hebrew.) And pahr-SHAHT is a form meaning “The Portion of” which is always followed by the name of the portion. For example, I might say, “This week we are reading from Parshaht Devarim, which is the first parashah in Devarim (Deuteronomy.) Parshaht Devarim translates literally to “the portion of Devarim.”

Are there words or phrases you have heard people use at Torah Study that confused you? Don’t worry about the spelling – all transliterations of Hebrew are approximations. I’d like to help demystify the words – words should illuminate, not get in the way!