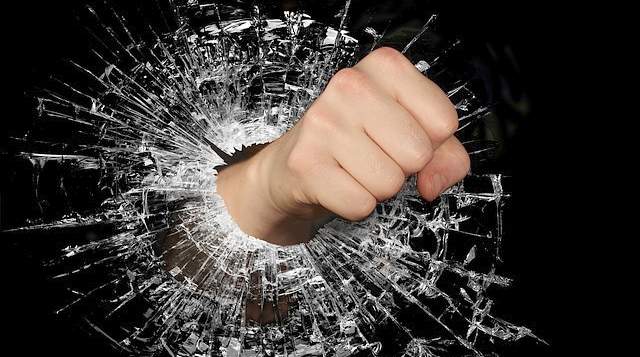 Image: A fist punches through a glass panel. (WenPhotos/Pixabay)

Rabbi Shimon ben Eleazar used to say: Do not appease your fellow in the time of his anger, nor comfort him while his dead lies before him. – Pirkei Avot 4:23

On the face of it, this saying makes no sense. Why shouldn’t we appease someone who is angry? Why not comfort a person when he is bereaved?

The clue to Rabbi Shimon’s meaning is hidden in the second clause. In Jewish tradition we do not attempt to comfort a mourner until after the burial of the dead. The stage of bereavement before burial is called aninut. During that time, mourners are relieved of all Jewish responsibility except the responsibility of providing for a proper funeral and burial. We do not speak to them unless absolutely necessary and we do not bother them with comfort. This is not a cruel practice, but a kind one: we understand them to be in terrible pain and to be carrying a great burden (the funeral.) Anything we might say would only be a distraction.

So the teaching here is: don’t try to comfort people until they are in a position to take it in.

Then we can look at the first part and make more sense of it:

Do not appease your fellow in the time of his anger.

Rabbi Shimon is advising us that when people are very angry, they can’t listen to reason, any more than a person who has just lost a loved one can be comforted. Appeasing an angry person won’t work, and arguing with them definitely won’t help matters. In both the case of the mourner and the angry person, the only thing that will help is time.

As time passes, the mourner will bury the dead, and will gradually become ready for comfort and human connection. The angry person, too, may have a chance to cool off and have a genuine discussion (unless, of course, they choose to work themselves into greater and greater anger.)

So when I happened to read Rabbi Shimon’s words today, I was glad to be reminded of Jewish teachings about grief and anger. Shimon is saying that we do not get anywhere when we tell people how they “should” feel. When emotions are high, it’s a time to listen, not to argue. If listening is impossible, then it’s a time to step back.

Now some readers may be thinking, but rabbi, didn’t you recently write that whites need to challenge one another on racist talk? I did write that, and I’m not backing down from it. Rebuke can be a mitzvah when it is properly done. There are better and worse ways to go about it, all informed by Jewish tradition:

It is important to treat every person with dignity. The rabbis tell us that publicly embarrassing a person is like shedding their blood. Take a person aside to say privately, “Are you aware of how your words sounded? The words “x,y,z” sounded racist – surely you didn’t mean it that way!” Calling a person racist is just going to enflame the conversation, but pointing out words or behaviors gives them something they can change. Maybe they need help hearing themselves. If a quiet rebuke does not produce a genuine apology, then perhaps confrontation is necessary.

Name calling never helps. We get farther if we talk about racist behavior and language, rather than racist people. Calling people names never persuaded someone to change. Pointing out behavior is different than calling names. People can do something about their behavior.

Leave politics out of it. So many insults have been hurled between Democrats and Republicans, conservatives and liberals, that we’re all walking wounded. When someone says to me in a spiteful tone, “That’s just like you liberals,” I feel that nothing I have to say will get a hearing from them. I am sure, from what conservative friends tell me, that the converse is also true. For our own sakes, we need to lay off one another, no matter what the folks at Fox News and MS-NBC do. Let’s drop the insults and name-calling: have you ever known it to add to a fruitful discussion?

Give each person the benefit of the doubt. Actually, that’s another quotation from Pirkei Avot. When it is time to rebuke someone in private, assume that they meant well. Maybe they did or maybe they didn’t, but how can anyone know for sure?

Finally, when we are beside ourselves with strong feelings, it’s time to take a step back. It is only natural sometimes to feel angry or hurt, especially if we feel that we’re doing our best and we are not understood or appreciated. There is no shame in saying, “I am too angry/upset/tired to have a conversation right now.”

None of us are perfect. Torah calls us to love the stranger and who is stranger than the person with whom we disagree?  Let us embrace this difficult task together, and work towards a day when

One thought on “In a Time of Anger and Hurt”