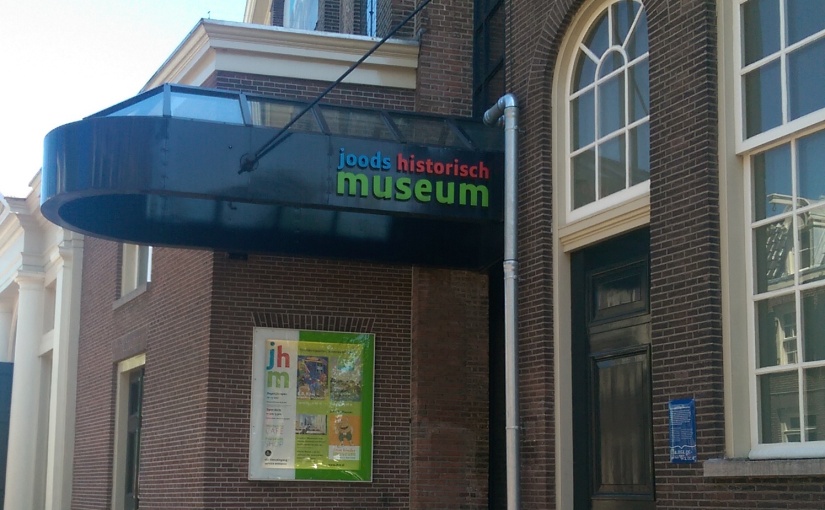 The Jewish Historical Museum in Amsterdam is located in the midst of the Jewish Cultural Quarter, near the Portuguese Synagogue. This is the historical Jewish quarter; I gather that most of Amsterdam’s Jews live in other parts of the city today.

Getting there: The museum itself is in a complex of buildings at 1 Nieuwe Amstelstraat, and the closest tram stop is Waterlooplein. The entrance for visitors on wheels is a door to the right of the main entrance; ring the bell and a guide will come to assist you in navigating to the ticket counter. They were happy to let me take my scooter everywhere I wanted to go.

The museum seems like a huge disjointed puzzle, but there’s a reason for that. It is actually a complex of four historic synagogues, the New Synagogue (1752), the Great Synagogue (1671), the Obbene Shul (1685), and the Dritt Shul (1778). All four were Ashkenazi synagogues and they were active until the 1940’s, when the Nazis closed, looted, and gutted them. Today Amsterdam is still home to many Ashkenazi Jews, some of whom pray in new synagogues built since the war, and some of whom are completely secular.

The permanent exhibits are impressive: one can get a good feel for the history of the Jews of Amsterdam from them. I thought I understood how important these people were to American Jewish history but half way through the exhibits realized that there are connections I never imagined. (More about this in a future post!)

The museum’s planners took advantage of the layout of the Great Synagogue to assemble the best exhibit on Jewish religion I’ve seen anywhere. The bimah has been restored, so that visitors can stand on the bimah and see an open Torah scroll (under glass.) Exhibits around the periphery explain Jewish holidays, the Jewish life cycle, the calendar, and home observance. All is brought to life with various artifacts and objects, some on loan from families and some on loan from the Portuguese Synagogue.

There is also an impressive exhibit on the secular lives of Amsterdam’s Jews, from the first arrivals in the early 17th century until the present day. I got a sense of a vibrant community that was merely tolerated when it first arrived, but which would have had few choices without that tolerance. The city fathers of Amsterdam were adamant from day one that the Jews must take care of their own and contribute to the prosperity of the city. This stricture was tested when the Ashkenazim arrived later in the century, fresh from the pogroms of the Ukraine and nearly all penniless. With the help of their Sephardic cousins, they eventually did well and built the four synagogues which make up the museum today.

What I did not realize before I visited the museum was that not all Jews in Amsterdam were prosperous. Some were almost unimaginably wealthy, but others were desperately poor. I followed the exhibits with interest and am still very curious about the economic disparity and how it played out in their communal life. I look forward to learning more about this in future, even if I have to learn to read Dutch to do it.

It’s a great museum. One sad thing: we visited on two separate weekdays, and both times had the museum largely to ourselves. Tourists, even Jewish tourists, seem to visit the Anne Frank House and the Portuguese Synagogue and then feel that they have “done” Jewish Amsterdam. For me, this museum and the Holocaust memorial at the Hollandishe Shouwburg were the highlights of my visit. I look forward to writing about the H.S. in a future post.

I could write for a very long time and not tell you everything about the Jewish Historical Museum. I recommend the website very highly for a “virtual tour” of the facility.

One thought on “The Jewish Historical Museum, Amsterdam”