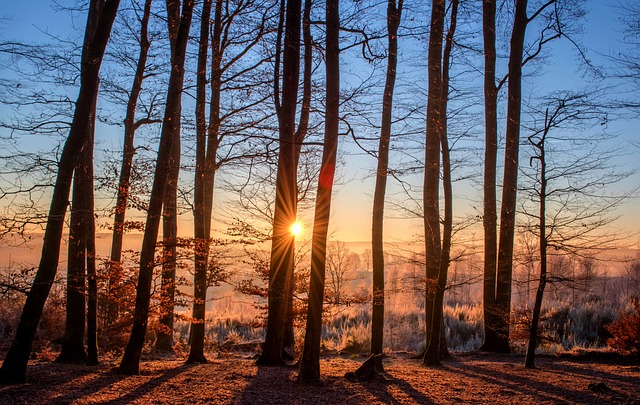 Image: Forest of bare trees, with dawn shining through. Photo by Mzlle/Pixabay.

All Jewish holidays have changed through history. This one may have changed the most, because it has gone from being an accounting device (really! see below) to being Jewish Earth Day. What hasn’t changed is its other name: The New Year of the Trees.

Here are the basic facts for Tu B’Shevat:

1. THE NAME.  Tu B’Shevat means “15th of Shevat.” Tu is a way of pronouncing the letters that make up the number 15 in Hebrew. (For more about Hebrew numbers, check out this article in Wikipedia.) Shevat is the month in the Jewish calendar that includes the deep winter in Israel, generally January and a bit of February.

2. ORIGINAL MEANING. Tu B’Shevat is often referred to as the “New Year for Trees.” But didn’t we already celebrate a New Year at Rosh HaShanah?  And a secular New Year on January 1? This is the beginning of a fiscal year for agricultural accounting of plants in the Land of Israel. Originally, it was a calendar date at which farmers began counting the year for trees, so that they’d know when trees were old enough to reap the fruit according to Jewish Law (Leviticus 19:23-25), and the point from which tithes could be calculated.  At this time of year, the trees are either dormant or just beginning to blossom.

3. MYSTICAL MEANINGS. After the Jews were expelled from Spain in 1492, some traveled east to the land of Israel. Most settled in and around the town of Safed, in the northern Galilee, which became a center for Jewish mysticism (kabbalah.)  These mystics began to mark the holiday with a seder (ritual meal eaten in a particular order) somewhat like the Passover seder. At a Tu B’Shevat seder, four cups of wine are drunk and seven different kinds of fruit.  The seder was a celebration of rededication to the Land of Israel and an appreciation of its trees.

4. ZIONIST MEANINGS. With the return to the Land of Israel in the 19th and 20th centuries, Jews revived the observance of Tu B’Shevat as a rededication to the land and a celebration of the relationship between Jews and this particular plot of earth. Many Jews worldwide observed the custom of planting trees in Israel, to replace trees that had been stripped from the land during the Roman and Ottoman periods.

5 thoughts on “Tu B’Shevat for Beginners”