A vidui is a Jewish confession of sin. We tend to associate this form of prayer with Yom Kippur and with the prayers of the dying, although a short vidui is part of the traditional weekday liturgy. A communal vidui includes sins which I may not personally have committed, but which some in my community may have committed. By claiming them as my own sins, I underline that I am responsible not only for myself, but also for elements in our communal life which may have fostered the sin in our members. Some Jewish prayers include acrostics as a hidden message within the prayer. For a vidui, making an acrostic of the entire alphabet is a way of saying that our sins go from aleph to taf, or from A to Z – we confess to an entire library of sin. I offer this vidui for my sins and those of my communities.

For all our sins, may the Holy One who makes forgiveness possible forgive us, pardon us, and make atonement possible.

For the sin of Arrogance, that makes it difficult to see our own failings

For the sin of Brutality, that makes it possible for us to stand by and think, “He must have done something to deserve it”

For the sin of Credulity, in which we have believed “news” from unreliable sources

For the sin of Disregarding facts that were uncomfortable for us

For the sin of Executing those whose offenses did not merit their death, and for standing by as our civil servants carried out those acts

For the sin of Greed, underpaying for work or over-charging for services

For the sin of baseless Hatred, that demonizes entire groups of other human beings

For the sin of willful Ignorance, not wanting to know things that are embarrassing to us

For the sin of Jailing massive numbers of people for nonviolent crimes, separated from opportunities to better themselves and their families,

For the sin of Minimizing the pain of others

For the sin of Omission, when we failed to act upon our principles

For the sin of Presuming on the basis of skin color

For the sin of Racism, in all its myriad forms

For the sin of Self-congratulation for acts of common decency

For the sin of Taking Offense when another points out that our words or actions were racist in effect, if not in intent

For the Unconscious acts which have injured others without our awareness

For the sin of Violence against other human beings

For the sin of Xenophobia, fearing and hating those who seem foreign to us

For the sin of Yakking when we should have been listening

For all of the sins of commission and omission, all the sins we committed consciously and unconsciously, for those that were simply accidents and those for which we failed to make an apology:

For it is through true acts of genuine repentance and a sincere desire to change that we will bring change to our nation: the rule of fairness, justice and peace. May our hearts grow, may all wounded souls be healed, and may we live to see the day when the scourge of racism is truly behind us.

This is an updated version of a prayer I wrote and published on this blog a few years ago.

This past August 5, the Movement for Black Lives published a 47,000 word platform that has hit a nerve in the American Jewish community. Most of the furor has focussed on a single hot-button word in the document: genocide. The rest of the attention has gone to a call for support of BDS, divestment from all things Israeli.

I have been quiet while I read and studied the document itself and read reactions from Jews whose opinions I respect.

Today Rabbi Sharon Brous of IKAR in Los Angeles published an article in the Jewish Journal that says what I’d like to say, only much better than I could ever say it. So instead of blathering here I will post a link to it for you.

President Obama gave a remarkable speech in Dallas yesterday. If you did not have a chance to listen to it, you can find the text of the speech here.

Usually when U.S. presidents give speeches at memorial services, the content is fairly innocuous. They seek to comfort, and avoid controversy at all costs. That was what I expected today when I flipped on the radio to listen.

Instead, I heard my President speak to many different constituencies, seeking to draw them together despite a week in which events have driven us apart. He spoke respectfully and very personally of each of the fallen police officers in Dallas. He acknowledged that they were killed as they watched over a peace march, a march that called the nation to witness the deaths of two men at the hands of police. He spoke to their families and fellow officers, but not only to them. He spoke as well to all those who marched peacefully under the #BlackLivesMatter banner, acknowledging that all is not well and that we all need to do more.

I am sure that there were some who heard that speech for whom it was “too much” or “not enough.” I can only imagine the care that went into crafting those words, walking the tightrope of agonies, but it was clear to me that he was trying to bridge that gap and bring us all together again.

So if you didn’t hear the speech, read it. Don’t settle for soundbites on the evening news; the whole thing ran to 40 minutes. It’s all worth hearing.

“We do not persevere alone. Our character is not found in isolation. Hope does not arise by putting our fellow man down, it is found by lifting others up. – Barack Obama, 7/12/16

Whoever destroys a soul, it is considered as if he destroyed an entire world.  – Mishnah Sanhedrin 4:5

Two entire worlds disappeared in the last 24 hours when Philando Castile and Alton Sterling died at the hands of police. Witnesses recorded both shootings, and the police do not look good in the video.

Late last night, my son posted on his Facebook page: “I am up late tonight, unable to sleep, sad angry and scared. I didn’t know these men, but I could have. Next time this could be someone I know and love.”

Do not tell me that “All Lives Matter.” I know that. The question is, do we American taxpayers know it? Because right now it looks as if we do not know it. It looks like those in power in America believe that black lives don’t matter. It looks like we and our police believe that all African American males are so dangerous that one must shoot first and ask questions later.

That is why it is necessary to say #BlackLivesMatter. We say it because we must learn it. “All Lives Matter” is a platitude that attempts to cover our inadequacies with the obvious. #BlackLivesMatter points to the problem – the fact that this morning, two more families are without beloved fathers who were primary breadwinners.

Today is the yahrzeit of Michael Brown.

His story has been back in the news, and I’ve watched today as social media has argued about his death, and about the movement that began with his death, #BlackLivesMatter.

A year ago these people lost their child to a violent death.

Let’s pause for a moment of human sympathy. 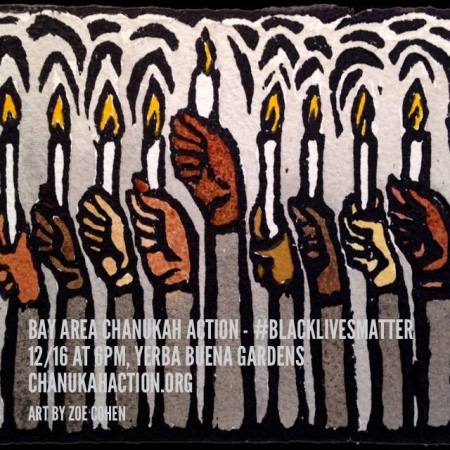 I’ve been at my desk all day, ignoring the obvious: my body is especially gimpy today. Staying at my desk was tempting because:

Fortunately for me, I have a wise spouse, who watched me get up from my chair and said, “I wish you were not going to that march tonight. You are in no shape for it.” After some hemming and hawing, I had to admit she was right. Even on the scooter, I was not in shape to be out in the rain, in a big crowd, far from home.

Inside my head, I feel fabulous, energized, full of love and Torah after the past week of retreats and travel. In the rest of my body, I feel about 100 years old. This is just a fact of living in a body with arthritis, old injuries and a bunch of other problems.

Sometimes we have to accept things as they are, and be grateful for what is possible, rather than grumpy about what isn’t. I’m grateful for the people who love me enough to tell me when I’m over-reaching, because I often fail to notice until it’s too late.

I remind myself what Rabbi Tarfon is quoted as saying in Pirkei Avot: “It is not incumbent upon you to finish the task. However you are not free to desist from it.” We have to try, but we do not have to push past the limits of our ability. I can contribute more to #BlackLivesMatter right now by teaching and writing. That’s the fact of it.

Do you have limitations against which you chafe sometimes? How do you cope, and how do you comfort yourself?