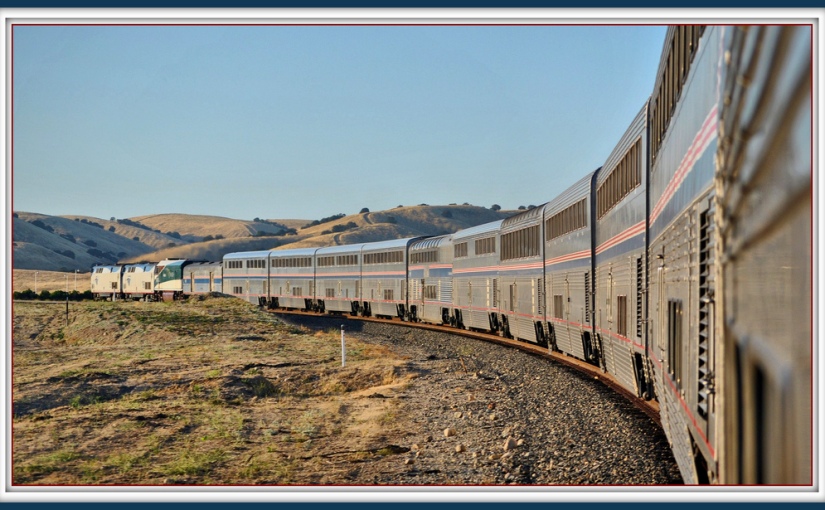 Image: The Coast Starlight rounds a curve north of Paso Robles, CA. Photo by Loco Steve, who reserves some rights. Check his flikr page for details.

Wow! I just returned from a family trip to Southern California and found 42 replies to the questionnaire I posted day before yesterday. Thank you all for your answers; I will tally them as quickly as possible and get back to you with what I’ve learned.

Honestly, it was wonderful to take a day on the train and simply step aside from the news cycle. I rode the Coast Starlight and watched the scenery of California sliding by my window. I had no idea what shenanigans were going on in Washington. When I had cell service, I called a senator’s office and said, “PLEASE DON’T LEAVE PEOPLE WITHOUT HEALTH CARE!” and then returned to my reverie watching the world go by.

Trains are a lovely way to travel. They are slower than airplanes, and that slowness seems to translate to an increase in civility. I chatted with several people of various backgrounds and our conversations remained friendly. We were all interested in going somewhere but we weren’t in a hurry. Maybe that is the answer to something.

One thing I noticed was that while there are still economic differences on the train, they are not as wide as on airplanes. Everyone had somewhere reasonably comfortable to sit. No one was horribly crowded. The people in sleeper cars had prepaid for their meals, which came with some priority on meal signups. However, if people ate in the dining car, they sat at tables set for four. If your party had less than four people in it, you were guaranteed an opportunity to make new friends.

The dining car was not an option for me. I was in the “accessible sleeper” which allowed me to lie down (for my back issues) and do stretches while flying along at 60mph up the California coast. I could not ascend to the dining car, so my steward took my order and brought food to me. Since I don’t eat meat, I chose Kraft Mac’n’Cheese from the kids’ menu. They were out of the vegetarian dish for grown-ups, but I was fine with the mac and yellow stuff plus some salad.

I did have to think for a while about the blessing to say over food that I wasn’t sure was actually agricultural output. (What IS that yellow stuff? I am not convinced it is really cheese.) I finally settled on the blessing for snacks, which is also appropriate for a pasta meal in which there is no bread:

Blessed are You, Eternal our God, Ruler of all that is, who creates various kinds of sustenance.

Whatever you are eating as you read this, may it sustain you, too.

2 thoughts on “What’s the Blessing for Train Food?”