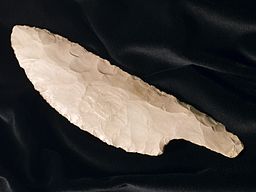 Image: A flint knife from Egypt, c.1000 BCE. This historical image held by Wellcome Images is available under a Creative Commons Attribution (CC BY) license.

Parashat Shemot has a curious little story in it, one of the most mysterious passages in the Torah.

Moses marries Zipporah, the daughter of Yitro, the priest of Midian. There is no mention of any conversion to Judaism. This gives us two alternatives:

Traditional interpretations tend to go with #2. However, I am not so sure. Was the marriage of Moses and Zipporah an intermarriage? We have stories in midrash about how Yitro eventually converted to the religion of the Hebrews, but I am not aware of any such midrashim concerning Zipporah.

So it happened on the way, at the lodging-place, that God met him and sought to kill him. Then Zipporah took a flint and cut off the foreskin of her son, and cast it at his feet; and she said: ‘Surely a bridegroom of blood art thou to me.’ So he let him alone. Then she said: ‘A bridegroom of blood in regard of the circumcision.’

It looks like a fragment of a story, sandwiched in between God’s instructions to Moses and the little family’s arrival in Egypt. The pronouns make it particularly confusing, and I left them as written, because I thought you might enjoy puzzling over them.

To my eyes, it looks like Moses neglected to give Gershom a bris [ritual circumcision.] God was unhappy about this, so unhappy that He suddenly announced he was going to kill Moses. Zipporah stepped in and performed the bris, throwing the foreskin at Moses’ (?) feet. Then she said something very weird, and God left them alone. Zipporah, realizing that she’d said something weird, tried to clarify it.

All that’s really clear here is that Zipporah is the heroine of the tale, and Gershom was finally circumcised.

Rabbi David Kasher has a fascinating take on this story, and did a better job of searching the midrashim. You can read his article on Parsha Nut.

8 thoughts on “Zipporah is My Hero”