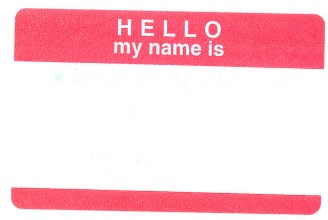 God has a lot of different names and titles in Judaism. Here is a short guide to just a few of them:

For teaching purposes, I am writing most of these names out as they would be pronounced. Some Jews do not pronounce certain names of God out of reverence except it prayer, or at all.

YUD-HEY-VAV-HEY (never pronounced aloud) –  This is the personal name of God, four letters that appear to be related to the verb “to be.” It has not been pronounced aloud since the destruction of the Temple in 70 AD. For a long time before that, it was pronounced only by the High Priest, and only on Yom Kippur. When an observant Jew sees this name, he or she substitutes other names for it in Hebrew, usually “Adonai” or “HaShem” (more about them below.)  Some English translations transmit it as “LORD,” often in caps. Some modern Jewish translators prefer “The Eternal” as a substitute for translation.  This name is also referred to as “The Tetragrammaton” (Greek for Four Letter Word).

EHYEH-ASHER-EHYEH – (pronounced as written) – This Hebrew phrase is one of the answers given when Moses asks the name of God in Exodus 3:14. It translates in English to “I will be what I will be” or “I am what I am” or “I am what I will be.” In the same verse, God also gives Moses the shortened form of the same name “Ehyeh”. The next verse, Expdus 3:15, gives the Tetragrammaton as the name.

ADONAI (ah-doh-NIGH) – This is the word most often substituted for the name that isn’t pronounced. It is usually translated as “Lord” or “My Lord” in English. Many observant Jews do not even speak this word aloud except in prayer.

HASHEM (hah-SHEM) – “The Name” – This is not a name per se, but it is used as a substitution for the four letter name of God. In English, it’s usually rendered as “God” or simply as “Hashem.”

JEHOVAH (not used by Jews) – This is a vocalization of the four letter name for God, an estimation made by Christian scholars using the four consonants of the Tetragrammaton combined with the vowels in Adonai. It appears in William Tyndale’s English (Christian) Bible as the translation of the Tetragrammaton. This pronunciation is now thought by most scholars to be in error.

YAHWEH (not used by Jews) – This is the vocalization of the Tetragrammaton used by most academic Biblical scholars today, although there are still questions about whether it is the pronunciation used by the ancient Jewish priesthood. However, observant Jews will seldom if ever pronounce this word – they will instead use one of the substitutions above.

Often, God is not referred to by name but by title, just as one might refer to Elizabeth of Windsor as “The Queen of the UK.”

ELOHIM (el-loh-HEEM)  – This is the first title of God that appears in the Torah, in Genesis 1:1. It is a curious word, since it is technically in the plural, although it is understood as a singular title. Generally English translations render it as “God.”

EL (EHL) – This is both the Hebrew word for “god” and the name of a Canaanite deity.

GOD – God is an English title, not a name of the Eternal. The word has Germanic roots.

LORD – This title is from the Old English Hlaford, meaning “master.” It was also used to translate the Latin word Dominus.

Bottom line: Modern Jews avoid pronouncing the four letter name of God. First, we don’t know how to say it correctly. Secondly, tradition forbids saying it. To some it may seem silly; we know that lightning will not strike if we say it. It is a matter of respect, and a way of reminding ourselves that the Eternal is, above all, a great mystery beyond any words we can say or any image we might make.