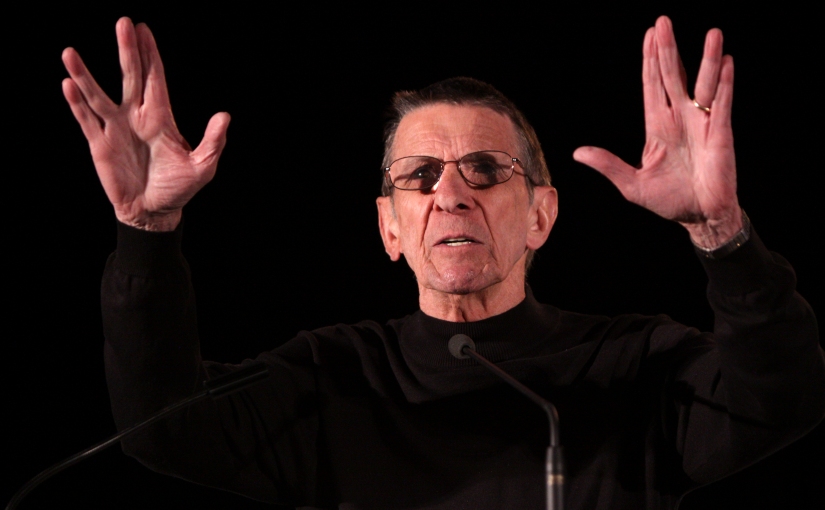 Image: Leonard Nimoy demonstrating “duchanin” – the blessing of the Jewish priests – at the Phoenix ComicCon. Photo by Gage Skidmore.

Rabbi John Rosove’s blog is well worth reading on a regular basis. This particular entry, with a poem by Leonard Nimoy z”l, is particularly appropriate for Elul.

It’s been six months since we lost Leonard, and his family misses him dearly, his gentleness and intelligence, his profound interest and concern about the world, his very large heart, curiosity, and penetrating mind, his simple loving presence.

This poem of Leonard’s below came to me from a friend. I had not seen it before which points to one of Leonard’s virtues – his modesty and humility. Though he knew what were his strengths and gifts, he didn’t talk about himself that way. He spoke rather about ideas, the creative process, the arts, world events, politics, and his family.

Leonard’s poem is part of a longer work that he published in 1973 that included a blend of poetry with black and white photography.

Given the poem’s theme, it is particularly appropriate for us to read now, during this season of Elul, the Hebrew month preceding the High Holidays. I post…

A life is like a garden. Perfect moments can be had, but not preserved, except in memory. LLAP – @TheRealNimoy

That was the final tweet from Leonard Nimoy, who used Twitter like the artist he was in so many other media. Like most people, I first encountered him playing Spock, the misfit officer on the Starship Enterprise. Like any good actor, he used pieces of himself to give life to that role. Two years in the US Army as a Jew must have been great preparation to play the only Vulcan on the Enterprise.

I never had the pleasure of meeting Mr. Nimoy but I know several people who did meet him in various settings. What strikes me now is that I’ve never heard anything bad about the man: he was kind and polite in his dealings with fans and he was a pillar of his synagogue. I gather from his artwork that he was a good Reform Jew, asking questions of the tradition at every turn. If you doubt that, check out The Shekhina Project (NSFW.)  He had a true artist’s eye, seeing beauty where others refused to see it: check out The Full Body Project (also NSFW.) He and his wife Susan gave generously to their communities via the Bay-Nimoy Early Childhood Center and the Griffith Observatory in Los Angeles – and those are just the gifts of which I am aware. Everything I’ve heard suggests that there were many small generosities that will never be public.

All of this is to say that the man was a mensch. He played a role that became a big deal in pop culture, but it was only one of many roles he played in his life. Some had more artistic merit, perhaps, and one was the role we all should play, that of Human Being.

In a place where there are no menschen, be a mensch! – Hillel, in Pirkei Avot 2:

If those of us who never met the man are sad to see him go, I ache to think of the grief his family and friends are feeling. May they be comforted among all the mourners of Israel and Jerusalem.

Perfect moments and good people are with us only for a moment. We can preserve them only in memory. Thank you for all you taught us, Leonard Nimoy.