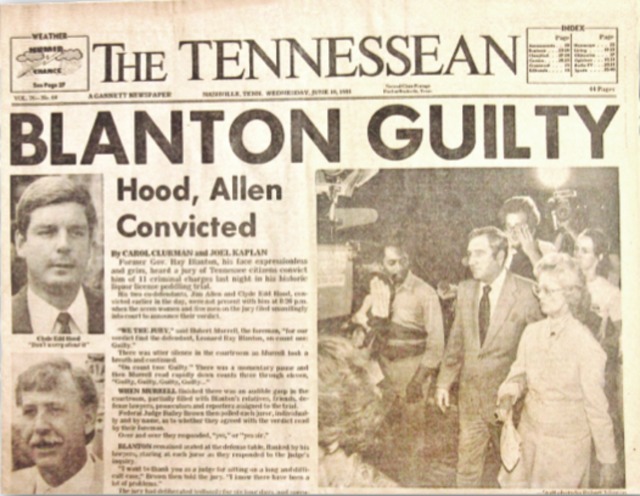 Image: Front page of the Nashville Tennessean after Gov. Ray Blanton was convicted of selling alcohol licenses. Headline is “Blanton Guilty.” (from the Nashville Post)

I should mention up front, there’s no real Jewish content to this post, I’m just taking a trip down memory lane. However, I think you may find it interesting in light of recent events.

The President’s pardon of Dinesh D’Souza, convicted of campaign finance fraud, and his talk about pardoning Rod Blagojevich have sent me down memory lane.

In 1975, when I was still a Tennessean, we elected a scalawag named Leonard Ray Blanton to be Governor of Tennessee. He had already served three terms in the U.S. House of Representatives, from 1967-1973, so it isn’t like we didn’t know what we were getting. He was famous for his poor attendance record in the Congress and his pursuit of pork barrel projects for his part of the state. (I must admit, the 7th congressional district had the nicest road surfaces of any rural counties in Tennessee.) He was also known for having come up as a politician through the Crump Machine out of Memphis.

In other words, anyone who thought Leonard “Ray” Blanton was an innocent was not paying attention.

Well, he got elected governor because in those days, we’d only elected one Republican governor in the previous 50 years. That was a nice dentist named Winfield Dunn, and everyone was so shocked at having a Republican governor that between four years of Dr. Dunn and the Watergate scandal, it just seemed safer to go back to what we were used to. (I say “we” although I voted for his opponent, Lamar Alexander, today a Senator from Tennessee. My politics have changed since I was in my 20’s, but I think Senator Alexander is a sight better a human being than Gov. Blanton ever was, despite his mistaken opinion on many matters.) Anyway…

Governor Blanton ran as a populist, putting together a coalition of assorted folks who believed that Republicans were practically the devil because they’d brought in Reconstruction 100 years before. (I wish I could say I was making that part up.) He talked a lot about morals and about honesty and Christianity, so of course he was going to be a good governor, right?

Once he was elected, however, he became known for heavy drinking and womanizing publicly, for vulgar language and high-handed ways. He gave himself a five-figure raise. The papers reported on his expensive junkets around the world to attract business to Tennessee and on the entourage of his friends who went with him. There were rumors about much worse, stuff like selling pretty much anything that wasn’t nailed down in his Capitol offices. The state of Tennessee even paid his bar bills and those of his cronies, until the newspapers shamed him into paying us back. Meanwhile the legislature changed the law, so that he could be the first governor in Tennessee history eligible to serve a second term.

By 1977 it was beginning to smell pretty bad. He fired a single mother named Marie Fajardo Ragghianti, who his administration had hired to be Chair of the Pardons and Paroles board, an improbable hire given her youth and inexperience. She refused to release a shady bunch of characters he pardoned because she suspected they had paid bribes to someone for their pardons. It was a very bad business, but there was no proof Gov. Blanton was involved. For a while, Ms. Ragghianti was out of a job, her name was mud, and after she went to the FBI, she was threatened by thugs who felt she was not sufficiently respectful of the governor. If you want the details of that story, you can watch the movie Marie.

By the next election, in 1979, everyone smelled the horse manure, so we elected Lamar Alexander governor over Blanton. However, Gov. Blanton wasn’t done with us. The Chief Justice of the Tennessee Supreme Court got a phone call from the Lieutenant Governor and the State House Speaker that Gov. Blanton was staying up late signing pardons willy-nilly. His plan was to turn loose every white murderer or rapist in the state prison system as a big “so there” to the people of Tennessee for not re-electing him.

They got Mr. Alexander up and swore him in real quick, three days early and in the middle of the night, so that Gov. Blanton couldn’t sign any more pardons. Lieutenant Governor John Wilder called it “impeachment, Tennessee style.”

Ray Hill of the Knoxville Focus would later write:

Despite his populist rhetoric and talk of honesty and political morals, Ray Blanton would preside over perhaps the most corrupt regime in Tennessee history. (Knoxville Focus, 1/22/17.)

The cooperation of politicians from both sides of the aisle put an end to Gov. Blanton’s shenanigans. They put love of the State of Tennessee ahead of their own agendas. I’m proud of them to this very day. After Lamar Alexander’s dramatic midnight swearing-in, law enforcement in the state and at the FBI went to work and eventually Blanton was indicted and convicted on charges he was convicted of charges of extortion and conspiracy for selling a liquor license, and he spent 22 months in prison. Two of his cronies were convicted of selling the pardons, but he was never officially charged with it. Governor Ray Blanton died in 1996, still insisting that he’d “never taken a dishonest dollar” in his life, and I’m sure somebody still believed him.

When good people are willing to stand up and be good people, when we are willing to put the common good ahead of our own pride and self-interest, good things can happen. If on the other hand, previously decent people can’t see past their ideologies and their greed, then evil will prevail.

That’s all I’ve got to say.