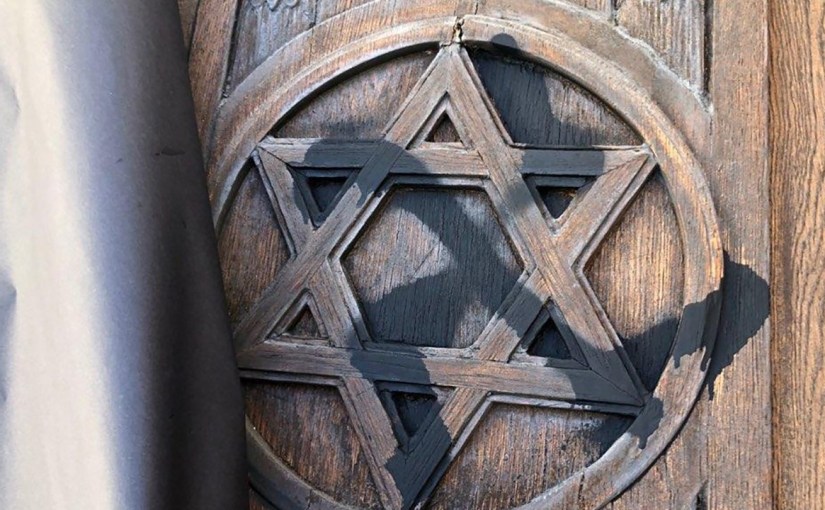 The heavy old doors are weather-worn, their 106 years showing. I’ve walked through them many times and on many occasions: holidays, weddings, numberless Shabbats. Nowadays they are kept locked, because our security has to be very tight at Temple Sinai, but they are still part of the beautiful façade of the building.

We got another reminder this week of the need for security. Someone spray-painted a swastika on that old door, along with other vandalism on the facility. The first I knew of it was an email from the senior rabbi, Rabbi Jacqueline Mates-Muchin, and the executive director, Terrie Goren. As they wrote:

This is unfortunate news to share, yet we are grateful that neither the graffiti nor the perpetrator posed a direct threat to our staff or congregants. Our beautiful sanctuary has stood on the corner of Webster and 28th streets for over 100 years. It will weather this challenge, as will we.

This is just the latest such incident. Temple Sinai is an urban synagogue, and as such has to deal with graffiti from time to time, but this was unmistakable in its hateful intent. The memory of Rosh Hashanah morning in 2017 is still sharp, too, the last time someone put explicitly antisemitic and obscene paintings on the exterior of the building.

The Oakland Police Department tweeted on Wednesday evening that they have a suspect in custody. I appreciate their effort, and at the same time, I do not feel particularly relieved. I am acutely aware of the rise of antisemitism here and elsewhere in the United States.

Most minorities in the U.S. are feeling threatened in the shadow of the upcoming election. The hateful talk on social media has reached frightening levels.

I have two requests of my readers, if you are thinking, “How can I help?”

The first request is that you vote in the November 3 election, if you haven’t already done so. Nothing is going to get better until we have better leadership in Washington, and while it is already dreadful, it can and will get a lot worse if we do not change our leadership.

The second request is that you search your heart about the categories of people who are hated by white supremacists: Black, Latinx, Asian, Native American, Muslims, LGBTQ, Jews, all people of color, immigrants… such a long list and I am sure I’m forgetting someone. If there’s a category on that list that makes you hesitate, some group of people you feel squirrelly about, then do the work of growing past that limitation. Educate yourself. Read a book. Change your heart.

Hatred is tearing American apart. It’s up to us to save it.