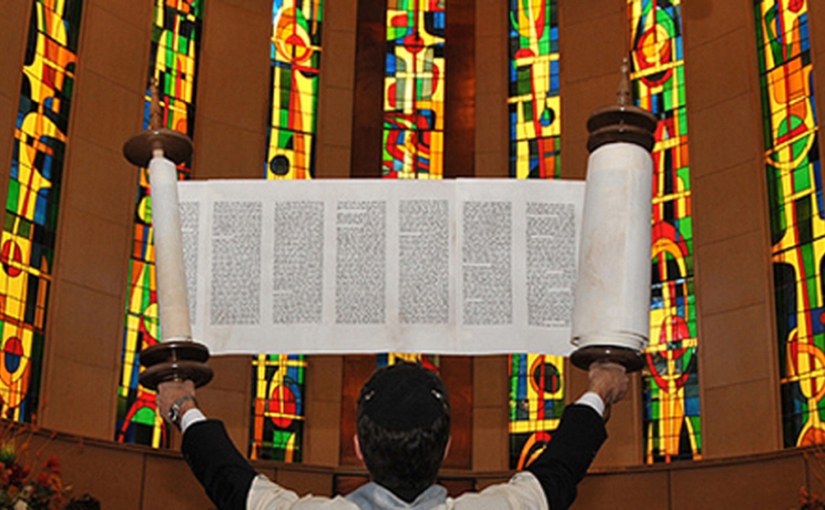 Some things just go together: coffee and doughnuts, movies and popcorn, beer and pretzels. Hagbah and glilah are like that: you rarely see one without the other, since they are part of the ceremony of reading from the Torah scroll.

Hagbah [“lifting”] is the dramatic lifting of the Torah scroll after a Torah reading. It is done by the magbiah, who lifts the scroll in such a way that the part of it that was read is visible to the congregation. Hagbah takes both muscle and technique, since even a light Sefer Torah may weigh 20 pounds and is an extremely fragile object, sewn together with sinew from a kosher animal. (See How is a Sefer Torah like a Space Shuttle? for photos of Torah assembly.) A heavier Torah may weigh 50 pounds or more, and be just as fragile.

We lift the Torah so that everyone in the community can see that the reader was actually reading from the scroll, not from a book. It is also a reminder that at the first Torah reading mentioned in the Bible, everyone could see the scroll:

Ezra opened the book in the sight of all the people.

The stakes are high: traditionally anyone who drops a Torah scroll and anyone who sees it drop must fast for 40 days. Also, a dropped scroll will have to be checked by a sofer [scribe] and repaired if damaged. If dropped during hagbah, while it is open, the parchment may tear, which requires a complete replacement of one or more panels of the scroll, a very expensive operation.

Who does hagbah? That will depend somewhat on the custom in the congregation. In most Reform and Conservative congregations, the magbiah must be an adult Jew who has been trained to do it safely. Training in hagbah, as with many things in congregational life, gets passed down the chain of tradition, person to person. If you are an adult Jew, and you are interested in learning, ask your rabbi or cantor to teach you or to point you to the person who can teach you.

Glilah [“rolling”] (pronounced GLEE-lah) seems somewhat less glamorous, since it is not a feat of strength, but it is no less important for the care of the Sefer Torah. After hagbah, the magbiah lowers the scroll carefully within reach of the goleil [person who does glilah] and helpers. They are usually sitting, and seize the top handles of the scroll as it is lowered towards their lap. Resting the bottom handles on their thighs, they roll the scroll snugly together, being careful not to pinch it or strain it. They tie the belt or wimple on the scroll, to hold it together, and then lower the Torah cover over it like a dress.

This is the procedure for Ashkenazi style Torahs, which have dress-like covers. A Sephardic style Torah is encased in a special box and remains in that box to be read. In most Sephardic services, hagbah comes before the Torah reading, not after. In its case, the Torah is heavy to lift, but easy to roll. (For an explanation of those terms, see What do Ashkenazi, Sephardic, and Mizrahi mean?)

Glilah may also be done by any adult Jew, according to the custom of the congregation. If you are invited to be a goleil (m) or golelet (f) and you have not done it before, just let the clergy or whoever is leading the service know that you will need a little help. While it is not as dramatic as hagbah, the potential for dropping or damaging the scroll is still quite real. I personally always ask for a hand when I’m the golelet – better safe than sorry!