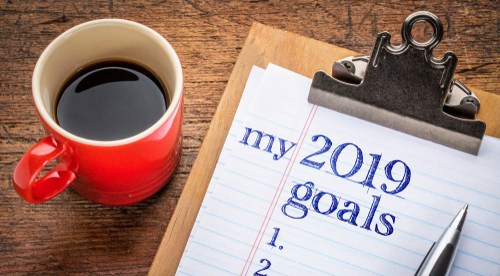 Image: Half-drunk cup of coffee next to a list “2019 goals” (Shutterstock, all rights reserved.)

If your resolutions were life-changing and are now accomplished, mazal tov! I’d love to hear about them in the comments.

If you are like many of us, and those resolutions faded, I want to suggest to you that they are still useful – not as resolutions, but as information. In last week’s Torah portion, Shelach-Lecha, Moses sent spies into the Land of Israel to check it out. The spies came back with a 10-to-2 vote that the Land was too scary and the Israelites too weak. God was furious at the lack of faith, and declared that none of that generation would enter the Land. Instead, they would live out their lives in the wilderness, and their children would enter the Land.

We usually read that story as a failure: foolish Israelites, not having the faith to finish the job! We read God’s response as a punishment.

But was it really a punishment, or just an acknowledgment of reality? The former slaves were not equipped emotionally to make war in the Land. Instead, God cared for them in the wilderness, feeding them manna and renewing their clothing. Midrash tells us that all their needs were met while they lived in the desert. The damage from enslavement was too great: so God cared for them until a new generation came of age.

Resolutions that didn’t work out give us important information about ourselves. Often we adopt a resolution because there is something we don’t like about ourselves. Do we need to change that thing – or do we need to learn to accept ourselves as we are? Did we need someone to guide us as we made that change? Did we need to seek out better support? Did denial about something important keep us from from our resolution? Or did we take on a resolution because we wanted someone else to change? (Spoiler: that never works.)

Let’s use these days of summer to think about those old resolutions. If they succeeded, celebrate! And if not, let’s mine them for insight and opportunity.

I wish you a happy Half Year!

One thought on “July 1: This Year, Part Two”