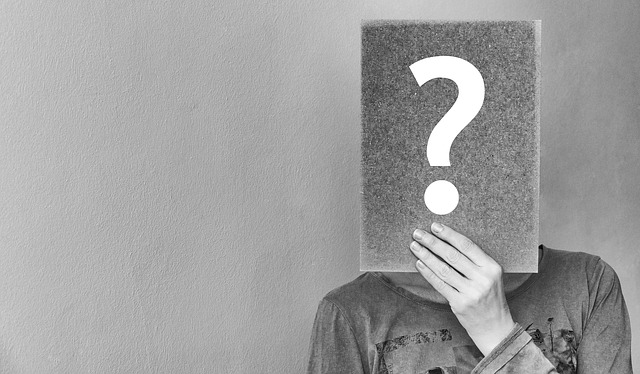 Image: A person holding a question mark in front of their face. (anemone123/pixabay)

What is a Jew? Today I assisted with the rituals associated with conversion to Judaism (beit din and mikveh). It set me to thinking about the process and these are some admittedly disjointed thoughts that I’ve been juggling. I thought writing might help, which is has, somewhat.

The usual question is “Who is a Jew?” which has come to be the standard opener for a discussion about qualifications for Jewishness. People often say, “Oh that’s simple!” and say “Jewish mother, or converted” but it isn’t that simple. There are differences among various denominations of Jews, plus arguments about what constitutes a valid conversion, and then you add in all the 21st century options for childbearing and we’re off to the races.

And anyway, that’s not what I’m talking about right now. What is a Jew?

We could look at the process of conversion as magic: someone is not-a-Jew then splish-splash in the mikveh and whoo! She’s a Jew! Presto-change-o! Except that it doesn’t work that way at all.

It isn’t magic. It’s a slow process that ideally takes time, because an adult identity has to make some significant shifts to move from “not-a-Jew” to “Jew.” The halakhic ritual markers are part of that, but by themselves they do not transform someone from one state to another.

So I repeat: What is a Jew?

A Jew stands in relationship with all the other Jews on earth. We stand together in something I will call the Jewish circle, meaning that everyone inside of it is a Jew and everyone outside isn’t a Jew. That circle also includes three to four thousand years of ancestors, depending upon whom you ask. Sometimes it feels crowded.

A Jew has some awareness of being a Jew. The person who suddenly discovers Jewish ancestry is not necessarily a Jew: first of all, that ancestry may not qualify them under the “Who’s a Jew” discussion, but secondly they may already feel connected elsewhere. A person who understands themself to be in relationship with Jesus Christ is not a Jew.

A Jew feels connected to other Jews. That may be a warm fuzzy feeling but it may also be a feeling of intense irritation, or of a terrifying threat. Jews notice other Jews in the news. Some Jews scour everything Jew-ish out of their lives, because being associated with Jews is anything from a nuisance to a source of terror.

As a rabbi, I have learned definite criteria for “Who is a Jew?” I have also encountered people who are quite sure they are Jews, and who do not meet the criteria I learned. After watching them and listening to them for a while, I am inclined to agree with them, but I confess I would be more comfortable if they availed themselves of the ritual process of gerut (conversion.) Rabbis are trained to be uncomfortable with fuzzy boundaries. That is partly because many Jews don’t like fuzzy boundaries, either, especially when it comes to questions like, “Is this person a Jew or not?”

A Jew is a person apart. We are not alone, because we are with other Jews in the Jewish circle. But the perception of both the world and the Jews is that Jews are different, apart. Words such as “chosen” or “special” are sometimes used to denote that quality, but most of us learn to be wary of those words, because they are loaded.