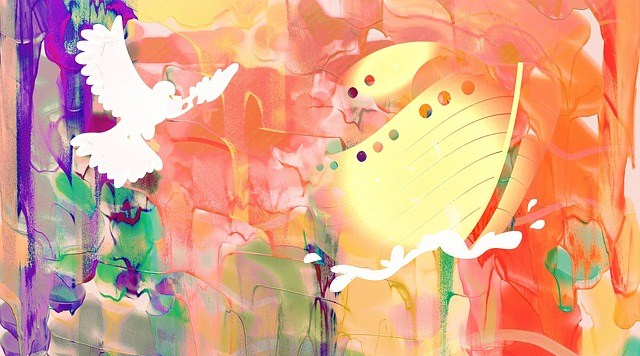 Image: Watercolor of the Noah’s Ark story, by Prawny, via Pixabay.

This week’s Torah portion is Noach. It contains two famous stories: Noah’s Ark and the Tower of Babel. It might be tempting to think, “Oh, I know those!” and skip right over, but it would be a bad mistake.

The great thing about Torah stories is that even though the words do not change, every year when we come back around to them, we are in a different place in our lives. When I was little, I was fascinated by the thought of all those animals: it seemed wonderful! When I was a young mother, I thought about Mrs. Noah: poor woman, all those animals and children to care for! This year, I think about the Flood itself: after a summer of weird weather, volcanic eruptions, hurricanes, and wildfires, it seems eerily close.

Then this past Monday, the Intergovernmental Panel on Climate Change issued a report that describes a world of food shortages and wildfires, and a mass die-off of coral reefs as soon as 2040 — a period well within the lifetime of much of the global population. They predict the end of our world as we know it, within the lifetimes of most of the people alive today.

So take a look at these famous stories: read the parashah for yourself! Here are some writers with different points of view on the stories in Parashat Noah:

The Scary Side of Noah’s Ark – Rabbi Ruth Adar