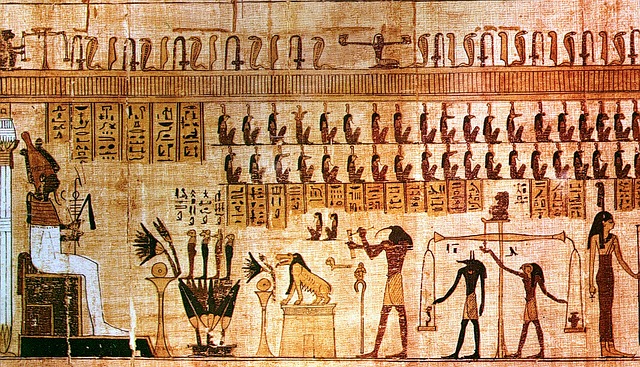 Image: The Weighing of Souls, from the Papyrus of the Book of the Dead, Egyptian museum, Turin Italy (photo by Souza_DF/Pixabay)

Each year, when I come to the seder table, I experience it a little differently.

At my very first seder, before I even thought I could become a Jew, I was mystified. I was the Child Who Does Not Know How to Ask at a seder that was mostly in Hebrew and completely opaque to me. What I did know was that I had been invited to join that household for something precious to them. I listened, I followed directions, I drank four cups of wine and I left feeling a little sick. I look back on that seder, and realize that I was there as an observer, not as a participant, and four cups of wine is a lot of wine, so OK.

Every year since I began my journey into Judaism, the seder sneaks up on me. The first few years, I was worried about performance, from the dishes to the text. I wanted it to be “perfect.” I wanted it to be a correct seder. It never was, and finally it dawned on me that I was missing the point.

In the midst of the Maggid, the portion of the Haggadah where we retell the events of the Exodus, there’s the following passage:

In each and every generation, a person is obligated to see himself as if he left Egypt, as it is stated (Exodus 13:8); “For the sake of this, did the Lord do [this] for me in my going out of Egypt.” Not only our ancestors did the Holy One, blessed be He, redeem, but rather also us [together] with them did he redeem, as it is stated (Deuteronomy 6:23); “And He took us out from there, in order to bring us in, to give us the land which He swore unto our fathers.”  – Haggadah from Sefaria.org

This is the passage that finally explained to me what I was supposed to be doing at seder. I began digging at the concept of Egypt, and the results have been coming for over 20 years. Each year, sometime during the seder, I identify an Egypt that I have left, or in which I am still trapped and in need of deliverance.

I don’t know what Egypt I will be delivered from this year. All of us have “narrow places” in our lives, places that we’ve gotten out of, or can’t get out of, or ways in which we are stuck. The message of the seder is one of hope: wherever I’m stuck, whatever is sticking in my throat, the situation is not hopeless. The sea may or may not part (I’m open to a miracle) but Pharaoh cannot hold me: I am free.

2 thoughts on “Many Seders, Many Egypts”