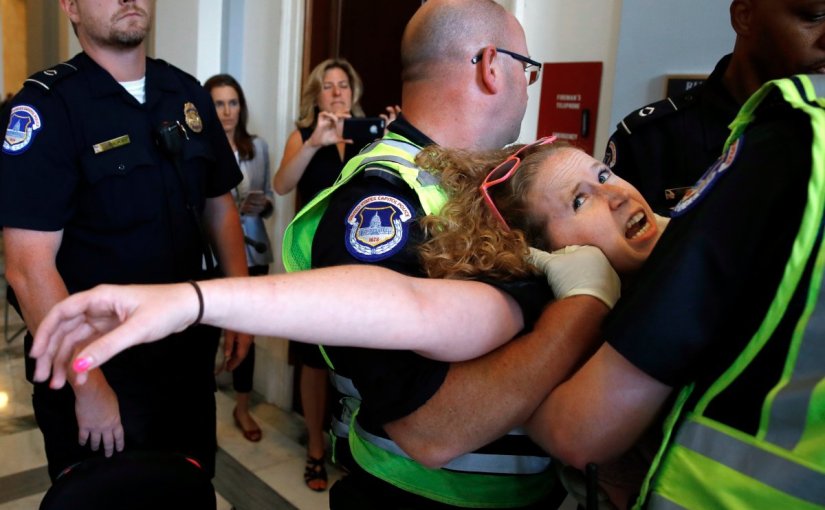 Image: Stephanie Woodward of Rochester, NY was taken out of her wheelchair and removed from the hallway outside Sen. Mitch McConnell’s office. (AP Photo/Jacquelyne Martin)

During the struggle to keep the Affordable Care Act intact, many of us were horrified by the images of disabled activists being dragged down the hallway outside Senate Majority Leader McConnell’s office. By simply being there and offering only passive resistance, they made a powerful protest.

Since #Charlottesville, I have heard increasing rhetoric about the need for active resistance, with hashtags such as #PunchANazi proliferating on social media. There’s a growing feeling among many on the left that the situation is too dire for nonviolence. They see this as a time to fight back, and they mean that in physical terms.

Some people do this fighting back as part of Antifa (Antifascists) which is not a single organization but a loose network of smaller organizations and individuals. As a movement, it started in Europe and is now very much a part of the scene at demonstrations in the U.S. I first became aware of them during the Black Lives Matter protests in Oakland, where they were infamous for looting and damaging local businesses. However I am also aware that they defended the non-violent clergy and others in Charlottesville, so I am conflicted. I am unwilling to demonize the whole movement as I read in some of the media.

Heather Ure (@riotheatherrr)  on Twitter published a thoughtful thread about what the growing acceptance of violence from the left means for disabled protesters. She pointed out that putting down nonviolence or dismissing it erases disabled people, old people, and kids. As Heather wrote:

… for a lot of people, esp./incl. disabled people, “just” being alive is their “punching Nazis.”

I’d like to take that a step further and say that as a disabled person with certain medical vulnerabilities, I have to stay away from most demonstrations because of the escalation of violence on the left. I’m willing to be beaten up or worse by bad guys, but when friendly fire starts looking likely as well, it seems foolish to go at all. As an aging, fat white woman with a Southern accent, I’m well aware that people make inaccurate assumptions about me all the time. I look and sound like the people you imagine wearing a red MAGA cap.

So I stay away from demonstrations unless it’s the sort of thing where it’s appropriate to wear full rabbi drag (tallit & kipa.) I hate this. I want to be there. I want to stand up for what is right. I just don’t want to get hurt by the people who agree with me.

I also worry that many right-wing Americans are ruled more by fear than by racism per se. (The two are intimately entwined, but that’s another post for another time.) Violence from the left provides a rationalization for more violence from the right. It provides a rationalization for equipping the police like an army. It muddles the line between good guys and bad guys.

This post is more about questions than answers. I don’t have answers for the present situation. I just have questions such as, “How can I be most effective?” I lobby, I teach, I write, I use social media, I vote. It doesn’t feel like enough.

Dear Readers: What do you currently do as part of the #Resistance? What do you feel is your most effective way of fighting anti-Semitism, white supremacy, racism, homophobia, and all the other evils of our time?

Some of you may be tempted to reassure me or to tell me what you think I should do. Not interested, sorry. But I would love to hear what you are doing.

15 thoughts on “#Resistance, #Disability, and #Antifa”