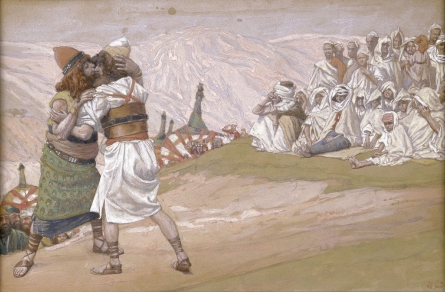 In the book of Genesis, Jacob and Esau were twin brothers who had great differences. Jacob wronged Esau more than once, manipulating their parents so that Esau lost his birthright and their father’s blessing. When they met again:

And Esau ran to meet him, and embraced him, and fell on his neck, and kissed him; and they wept. – Genesis 33:4

This sounds good, doesn’t it? But one midrash tells us that actually, the word וַיִּשָּׁקֵהוּ, “and kissed him” was actually a euphemism. What really happened (again, according to midrash) was that Esau bit Jacob! The next verses say that Esau refused Jacob’s gifts, so it is in keeping with the negative understanding of the verse, and later on his descendants were some of the bitterest enemies of the descendants of Jacob: the Amalekites.

Jacob and Esau are a cautionary tale about the serious consequences when we allow bitterness to fester.

I had an immediate, strong gut response to a post circulating on Facebook recently. Perhaps you have seen it. It begins:

There are those who have said that we should “work together” with the president and the Republican majority because they won the election and Trump is “everyone’s president.” This is my response:

I agreed with it so strongly that I copied it, signed it, and pasted it onto my own wall. There are things I’m simply not willing to do or to passively allow. The current administration has engaged in many of those things and declared its intention to engage in others, and I will not stand by and let them happen.

But then, someone I love and respect very much left a message on my wall in reply:

I did not vote for Obama but I prayed for his success every day. Now I pray for the current president and for those who are unable to deal with their anger. I felt Clinton had been a danger to our country and lied about it, so I could not vote for her. We deplorables did what we thought was best.

My reply to her:

As far as I’m concerned, you are no “deplorable.” I know you’d never support an act of cruelty, that there isn’t a nihilist bone in your body. While we disagree on the right way to get there, I like to think we want the same things for America: peace, safety, fairness for all.

I pray for the country. I pray for Mr Trump, who looks to me like he’s in a lot of pain.

I decided that if I was going to say what I would not “work together” on, I should also be clear what goals I could pursue with Republican friends.  Here’s what I was able to come up with after a little thought:

Things I would be glad to “work together” on with the current administration or any other:

• Investment in the infrastructure of this country, with the construction and other jobs that would bring.
• Training for American citizens for 21st century jobs. Heck, even if everything is going to run on robots, someone has to maintain the robots!
• A health care system that would include the maximum number of Americans, not just the fortunate.
• Figure out how we as a people are going to pay the debt we owe to our Veterans of all races, including those with physical and mental disabilities.
• Figure out a new way to meet the challenge of rampant drug and alcohol addiction. The “War on Drugs” is an utter waste. It’s been going on most of my life and the situation is now worse than when Nixon declared it. It’s time for a reset.
• Search out ways to lower the number of deaths by gunshot without engaging the merry-go-round of 2nd Amendment disagreements. What CAN we agree upon? Why not start there?
• A national movement to end name-calling and insults in public discourse. They do not add anything to our public life. Call our elected officials by their titles, not by disrespectful nicknames. Call out policies, not personalities.

Those are the things I can think of off the top of my head. Some part of each of them has been mentioned by at least one Republican elected official or voter in my acquaintance.

There are things that I will #resist with all my heart and soul: racism, baseless hatred, mistreatment of people of every age, race, religion, orientation, gender, and nationality. But I refuse to believe that I can’t work with half the country on at least some of the things I’ve listed above.

I absolutely agree that Torah, even basic morality, demand that we resist certain things (e.g. racism, including institutional racism) no matter what. At the same time, I don’t want to get so caught up in opposition to anything and everything that movement of any kind is impossible. I do not want my anger to cut me off from possibilities for good.

I don’t want to be Esau.

8 thoughts on “Jacob and Esau: A Cautionary Tale”