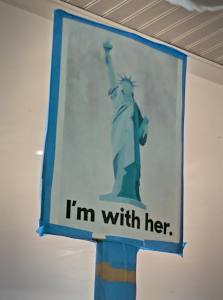 I am exhausted. I spent the morning at the synagogue and the rest of the day (when I thought i was going to take a nice nap) at a protest at San Francisco airport. Now it’s late and I want to post something but the body is saying, “Lie down, already!”

Our president chose to celebrate Holocaust Remembrance Day with an executive order. It barred citizens of seven Muslim-majority countries from entering the United States for the next 90 days and suspends the admission of all refugees for 120 days. (CNN) Our immediate protest was on behalf of the people detained at SFO who had the bad luck to have planes that took off while their visas were still good, and landed after their visas had been Trumped. I have spent some time as an innocent airport security detainee (a story I’ll share another time) and it is terrifying and miserable. I felt for those folks.

I had planned to blog tonight about the social justice tradition in Judaism. I know I’m blogging a lot about what some readers may think of as “politics” and I wanted to explain why I feel that I’m still blogging about Basic Judaism. However, that was before I spent 2.5 hours in a crowd screeching “Let In the Lawyers” and “No Bans, No Walls” at the top of my lungs.

A couple of random thoughts:

I’m rambling, because I am exhausted. Those were my two points. Go to bed, rabbi!