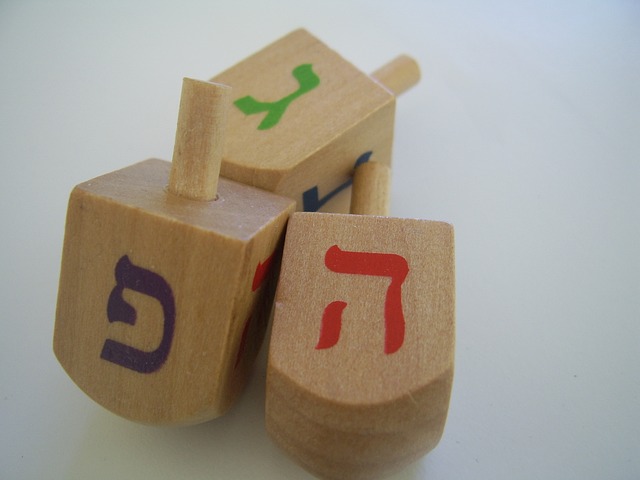 I love the way Jewish holidays change over the centuries to meet the challenges of history. Passover was once a sacrifice and a nighttime lamb BBQ with storytelling. Then we lost the Temple, and had to reinvent the celebration in the form of a Greek symposium banquet, the hottest educational technology of its time. They insured that it wouldn’t get too Greek (or, heaven forbid, Roman!) by taking the afikomen, the after dinner entertainment that often got out of hand, and reissuing it as a broken piece of matzah. Voilá: The Passover seder!

Chanukah lay dormant for centuries, a little festival with fried food and candles. The rabbis of old didn’t want us to make a big deal of it, because we might get the idea that making war on our oppressors was a good idea. They bequeathed us a miracle story and somewhere along the line we began playing dreidel. Then a series of events in the 19th and 20th centuries brought Jews new challenges. For one, after the Holocaust, never again would we dare deal with anti-Semitism by waiting for a miracle. The Maccabees gained new relevance in the shadow of the Shoah and with the foundation of the modern State of Israel. For another, while Christmas had never been any threat to Jewish culture, the 19th and 20th centuries saw the rise of a new festival: secular Christmas.

Christmas, too, had been a relatively minor affair for centuries. It was the feast of the birth of Jesus, layered on top of a popular Roman festival, Saturnalia. Then in the 19th century, British and American novelists and poets wrote about the holiday, recasting it as a holiday of family warmth, goodwill, and compassion, and downplaying the religious aspects. This began a process of popularizing Christmas. When business discovered that trees, decorations, presents and Christmas turkeys could set the cash register bells a-ringing, Christmas became big business. You can see the results in every shopping mall and city center. Devout Christians deplore the commercialization of Christmas (“put Christ back in Christmas!”) but secular Christmas has become a juggernaut.

Secular Christmas is now firmly planted in American popular culture, and it has spawned an entire season of frantic consumption. “Christmas comes but once a year” so there is pressure for it to be perfect, with no unmet desire, no unrequited fantasy. The tree must be brightly lit, the presents piled beneath, and if the credit cards get overloaded, well, it’s Christmas, after all!

And yes: I know there are families for whom secular Christmas is a time of warmth and light, who don’t max out their credit cards. I know that Christmas trees and Christmas mornings carry precious freight for many people: they are wrapped up with the fondest wishes for family love. I have no quarrel with them, for that is their tradition and it works for them. But it’s not the Jewish way of doing things.

We don’t have one big day in the year that must be perfect: even Passover, which probably comes the closest, happens over a week, and for most families, there are two seders to attend. We have Shabbat every week for family warmth and love, and for hospitality to strangers. If we really keep our full calendar of holidays, then we get a steady stream of small “Christmases” complete with Kodak moments. There are gifts of food to send at Purim, and a sukkah to decorate at Sukkot. There are festive meals again and again throughout the year. No holiday has to be perfect, because we have Shabbat every week.

In the 20th century in America, Chanukah has flirted with Christmas by experimenting with “Chanukah bushes” and adding gift-giving to the mix. When Chanukah tries to imitate Christmas, it loses both its Jewish character and the Jewish values deep within it. Chanukah at its best is about dedication to Jewish values and a resistance to idolatry, whether that idolatry is the worship of Zeus or the worship of consumer goodies.

Chanukah is equipped to challenge the darker aspects of secular Christmas. It is modest, where secular Christmas can be gaudy. It plays out over a week, instead of a single day that must be (and is seldom) “perfect.” Chanukah calls us to rededicate ourselves to Jewish values; secular Christmas pushes us to get the “best value.”

Chanukah is a big deal at our house, because it is pushback to secular consumer values, and most especially to the dark side of secular Christmas. We light the little menorah and say the blessings. We have an open house for our friends and the neighbors. We’re “advertising the miracle,” as it says in the Gemara, but the miracle we’re advertising is bigger than a jar of oil that lasted for eight days. We’re advertising the miracle that Judaism is still here, despite it all. And we’re dedicating ourselves to another year of living Jewishly.

We’re going to be doing something special for Chanukah at my home this year. More about that in the next post.

16 thoughts on “Chanukah: The Evolution of Holidays”