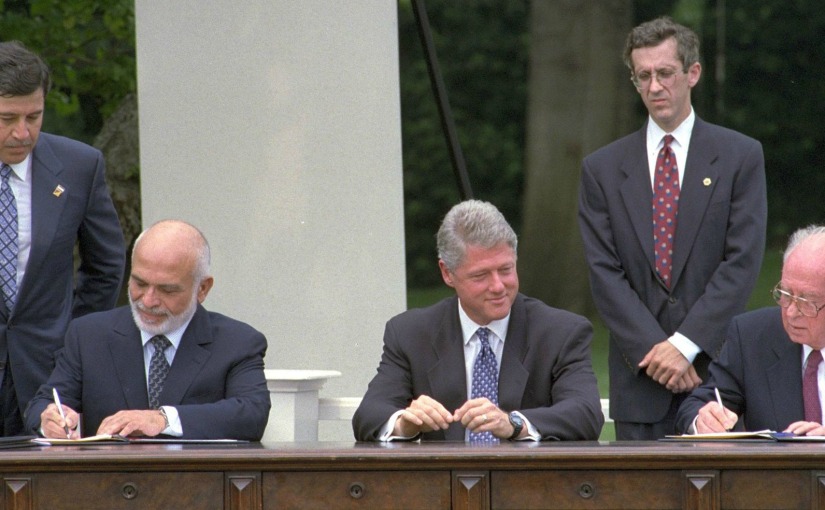 This month in the Jewish calendar is Cheshvan, sometimes known as Marcheshvan, “bitter Cheshvan.” It became much more bitter 21 years ago, when on the night of 12 Cheshvan 5756, Prime Minister Yitzhak Rabin was assassinated as he left a rally in Tel Aviv. He was murdered by a right-wing Jewish religious extremist.

Rabin, who had been a warrior most of his life, had in his later years become a fierce advocate for peace. His murder was a bitter event, indeed, and since that day the prospects for peace in Israel have diminished to heartbreak.

If you do not know much about Rabin’s life, here is the official biographical material from the Yitzhak Rabin Center in Israel. May his memory always be a blessing to his people, and may we someday achieve the state of peace of which he dreamed.

Update is at the bottom of the page.

I just got word via the Women’s Rabbinic Network that Anat Hoffman was arrested again last night at the Kotel, the Western Wall, when she was there with a group from Women of the Wall and another group from Hadassah. Since I can’t find any more information on Ha’aretz to corroborate the details I’m not going to say more than that.  She’s been arrested, again. I wish I were surprised.

Anat Hoffman is executive director of the Israel Religious Action Center, the legal and advocacy arm of the Reform Movement in Israel. She is also the chair of Nashot HaKotel, the Women of the Wall.  She was elected to the Jerusalem City Council and sat on it for fourteen years. She has been tireless in her efforts to seek fairness and justice for all in Israel.

In the recent past, women have been arrested at the Kotel on Rosh Chodesh for wearing a too-traditional tallit, for wearing a tallit in a manner too much like a man, and for similar ridiculousness. If this is a place that belongs to the whole Jewish people, why are women not allowed to pray there? Why must women be silent and meek there? Why is only one expression of Judaism acceptable there?

But you see, this is not really an issue about women praying at a wall, or women wearing shawls.  This is really a question of the humanity of women. Women’s images are disappearing from public view in Israel, because one group of Jews sees all women’s images, faces, voices, and presence as immodest.  A group of men spat upon a young Orthodox girl, walking home from school, because her (very modest) clothing did not meet their standards of modesty. As with the Civil Rights Movement in the United States, buses have become a battleground: do women have to sit in the back? may they ride at all?

So it is not a trivial matter  that a group of women are insisting on their right to pray at the most famous holy site in the Jewish world. This is not about the Wall. It is not about shawls. It is about women’s right to be visible without molestation or repression.

The facts are not all in regarding this latest arrest. I hope that Anat is all right. She is in my prayers tonight. But not just in my prayers: I am joining other members of the Women’s Rabbinic Network in sending a donation to the Women of the Wall in honor of her, and to help cover the legal expenses of this work.

If you would like to join me (please join me!) you can donate funds to either of these organizations.  Just click on the link, and it will take you to the donations page.

Women of the Wall

The month of Cheshvan is sometimes called “Mar”Cheshvan, Bitter Cheshvan, because there are no holidays or rejoicing in it. I am sorry to say that Anat’s arrest and the continuing assaults on women’s rights in Israel make this Cheshvan bitter indeed.  Let us hope that the time is coming when women can again stand at the Wall and pray, as we have done for centuries. Let us hope that some future Cheshvan is sweet.

Update:  10:58 pm, PST, Oct 16:   The Women of the Wall report on their facebook page that Anat was still detained at this writing, and they show a photo of her being taken away in handcuffs.  At their regular morning prayer time, two other WoW leaders, Director Lesley Sachs and board member Rachel Cohen Yeshurun, were also arrested.  (Now would be a very good time to “like” their page on facebook, if you use facebook.)