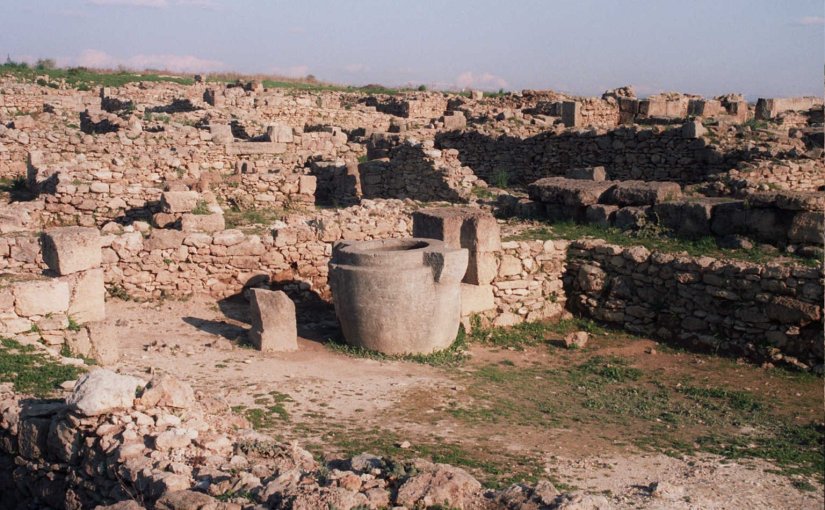 Some of the excavated ruins of Ugarit, or Ras Shamra. Photo by Loris Romito, via Italian Wikipedia. Some rights reserved.

I have a word to tell you, a message to recount to you: the word of the tree and the whisper of the stone, the murmur of the heavens to the earth, of the seas to the stars. I understand the lightning that the heavens do not know, the word that people do not know, and earth’s masses cannot understand. Come, and I will reveal it. – Ras Shamra inscription

The Bronze Age city of Ugarit sat on the coast in northern Syria. The citizens of that city left an enormous library of clay tablets inscribed in Ugaritic, a Semitic language. From those writings, we know that they worshiped El, Asherah, and Baal, Canaanite deities mentioned in our Bible. Some of their poetry has close parallels in our Book of Psalms. As you can see from the example above, the writings were vivid and very beautiful.

The “golden age” of Ugarit came to an end about 1200 BCE, at a time of great upheaval in the ancient Near East. The invasions of the Sea Peoples (Philistines) coincided with the destruction of the city. This corresponds to the period described in the Book of Judges:

In those days there was no king in Israel; every man did that which was right in his own eyes. — Judges 21:25