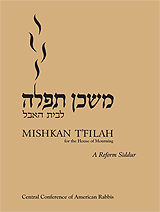 Image: Mishkan Tefilah for a House of Mourning, CCAR Press.

There are days when I bless my lucky stars that I get to be a rabbi.

I spent the early evening tonight with a grieving family. They had come together to mourn the loss of a man in his fifties, dead of cancer. He was a gifted musician and human being, and everyone who knew him misses him terribly.

These days, many Reform families opt out of shivah or shorten it to one or two days. They give many reasons. I suspect that for many of them, the idea of a whole week of official mourning is a frightening prospect at a time when they are already disoriented and upset, and I can understand that. It’s a shame, though, because shivah can be wonderfully healing.

This family has chosen to embrace the process of mourning. They’ve opted for a real week of shivah: for seven days his widow is staying home, surrounded by family and friends. I am a rabbi temporarily serving at their synagogue, and I have been invited in to lead the evening prayers most nights.

Last Thursday evening after the funeral the entire group was in shock. They were in that deep place of mourning where there is no consolation, only grief. I steered them through the service, hearing voices in the group check in and out as they were able. This was clearly a family that had just suffered an unthinkable loss. When we reached the point in the service where I offer the option of sharing stories or sitting in silence, they opted for silence. We sat quietly for a good five minutes. Afterwards, someone mentioned that it was good to be quiet together; they were all exhausted.

Tonight the mood had shifted. The family was relaxed but no longer exhausted. They are beginning to absorb the loss. The dog greeted me, snuffling, and a few people chuckled at his obvious pleasure at the “messages” from my dogs.

Tonight we sat in a circle. I began the service with “Hinei ma tov,” a song about how good it is to be together. We used some of the alternate prayers in Mishkan Tefilah for a House of Mourning. Since we began shiva last Thursday they’d been looking through the book a bit and several had requests for readings that they liked. There were song requests, too, and we sang “Oseh Shalom” twice because someone remembered a favorite melody. I let the service take the shape they needed, then we finished traditionally, with Psalm 23, El Male Rachamim, and Kaddish.

I said my goodbyes and slipped out. As I left, family and friends gathered in the kitchen, getting plates of food. Life is returning to this house, slowly but surely.