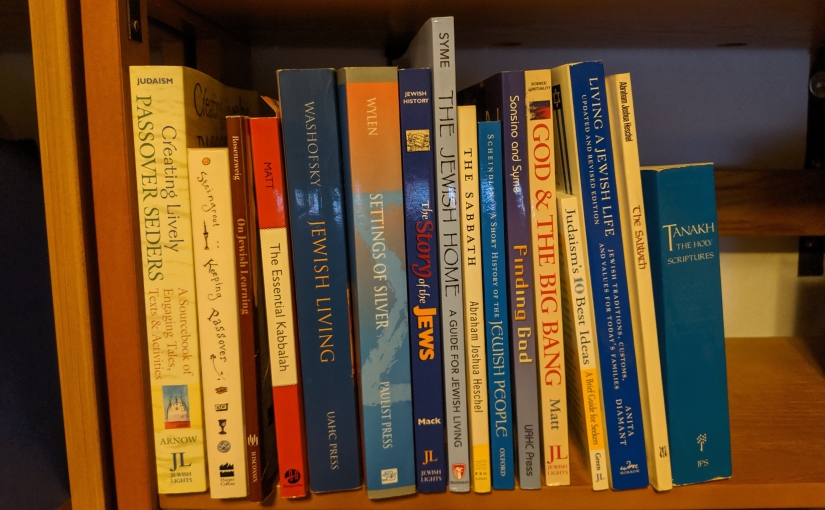 Image: A bookshelf with several of these books.

Every year I take a hard look at the list of books I recommend to the Intro to the Jewish Experience students. This year’s list omits some oldies and adds a few new books. No one needs to own ALL of these – I offer this list as a browsing list for your next step in growing your interest in specific Jewish topics.

*Books with an asterisk are those I strongly recommend to my Intro students. If I weren’t so concerned about their budgets, I’d require them.

*Settings of Silver by Stephen Wylen. (The only text I require for Intro to the Jewish Experience)

Here All Along: Finding Meaning Spirituality & a Deeper Connection to Life in Judaism After Finally Choosing to Look There by Sara Hurwitz. New and highly recommended.

What is a Jew? by Morris N. Kertzner. Another good basic text.

*Every Jewish home should have a Tanakh, a Jewish Bible. Most Reform and Conservative synagogues use a JPS Tanakh. (JPS is the Jewish Publication Society.)

If you are curious as to how the Jewish Bible is different from the Christian Bible, read Beginners’ Guide to the Jewish Bible. For a discussion of the various translations of the Tanakh available, read Which Bible is Best, Rabbi?

If you would like to own a commentary on the Torah, a book with footnotes that explain things in the text, I recommend any of these:

The Torah: A Modern Commentary, ed. Gunther Plaut (in many Reform synagogues)

A Torah Commentary for our Times, ed. Harvey J. Fields

What’s In It for Me? Finding Ourselves in Jewish Narratives by Stephen Fuchs  This little book is helpful for those who wonder what a collection of old stories and rules has to say to modern Jews today.

Who Wrote the Bible?, by Richard Elliot Friedman is a basic, readable explanation of the “documentary hypothesis,” the idea that the Torah is a blend of several different voices.

Every Jewish home should have at least one copy of the haggadah, the script by which we lead the seder every year at Passover.  There are many to choose from, from some rather uninspiring free haggadot to very expensive art books. Some of the best fall in between those two extremes. The best way to find one is to go to a bookstore during the month before Passover and browse them until you find the one that speaks to you. Some households write their own haggadot; that’s a project that’s best done after you’ve been to a few seders.

Seasons of our Joy by Arthur Waskow.

*The Sabbath by Abraham Joshua Heschel (Specifically has to do with Shabbat.)

Preparing Your Heart for the High Holy Days: A Guided Journal by Kerry M. Olitzky and Rachel T. Sabath

The Days of Awe by S.Y. Agnon (High Holy Days)

This is Real and You are Completely Unprepared: The Days of Awe as a Journey of Transformation by Alan Lew (High Holy Days)

My Jewish Year: 18 Holidays and One Wondering Jew by Abigail Pogrebin

How to Run a Traditional Jewish Household by Blu Greenberg

The Jewish Home: A Guide for Jewish Living (New Edition) by Daniel B. Syme

*On the Doorposts of Your House, CCAR Press (also in .pdf format) This book includes very detailed explanations of home rituals, from hanging a mezuzah to lighting the Chanukah candles.

Mourning and Mitzvah by Anne Brener (A superb guide for mourners)

Gates of Mitzvah: A Guide to the Jewish Life Cycle by Simeon Maslin

A Time to Mourn, A Time to Comfort: A Guide to Jewish Bereavement by Dr. Ron Wolfson and David J. Wolpe

Nurture the WOW by Danya Ruttenberg

How to Raise a Jewish Child by Anita Diamant

Putting God on the Guest List: How to Reclaim the Spiritual Meaning of Your Child’s Bar or Bat Mitzvah by Salkin, Lebeau, and Eisenberg

*Finding God: Selected Responses by Rifat Sonsino and Daniel Syme. Clear and simple approach to the question, What do Jews think about God?

The Book of Jewish Values by Joseph Telushkin

Your choice of history book will depend on your taste and preferences. Choose the one that works for you. *Do read at least one of these!

The Story of the Jews by Stan Mack (graphic novel format but quite good, an excellent choice if you are ambivalent about fat volumes.)

Wanderings: Chaim Potok’s History of the Jews by Chaim Potok Potok is a great story teller.

My People: Abba Eban’s History of the Jews by Abba Eban Eban was Israel’s first representative to the United Nations, and he was a major player in the foundation of the State of Israel.

A Short History of the Jewish People by Raymond Scheindlin A shorter history, good if you want “just the facts, ma’am” history.

Israel: A History by Martin Gilbert A detailed history of Israel from 1862-1997. Predominantly Zionist in its point of view.

Israel is Real by Rich Cohen Very readable. There are a few minor errors, but it is remarkably clear-eyed about the complexity of Israel and its emotional connection for American Jews.

A History of Israel: From the Rise of Zionism to Our Time by Howard M. Sachar A scholarly approach, staunchly Zionist.

The Accidental Empire: Israel and the Birth of the Settlements 1967-1977 by Gershom Gorenberg. Gorenberg is an Israeli journalist. If you are curious about the roots of the current situation and the occupation of the West Bank, this is a good choice.

The Israel-Arab Reader: A Documentary History of the Middle East Conflict, 7th Edition by Walter Laqueur A reader of primary documents. Better if you already know a little bit of the history of Modern Israel.

My Promised Land: The Triumph and the Tragedy of Israel by Ari Shavit. The writer is controversial, but the book is excellent and centrist in stance.