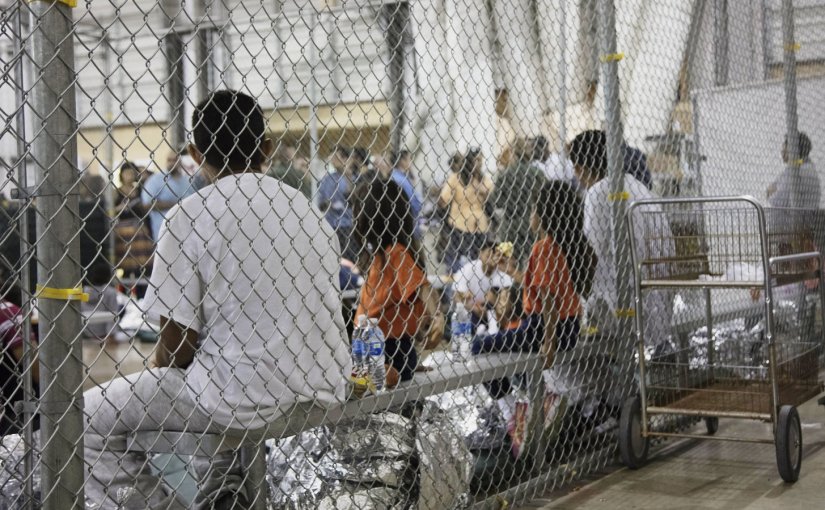 Image: A chain-link “room” jammed with people. The news is full of pictures of the camps on the southern border of the United States. The photo above is from one such news item, from “What We Know: Family Separation And ‘Zero Tolerance’ At The Border” from npr.org.

First a quotation from the great teacher Maimonides:

You do not find a mitzvah greater than the redemption of captives, for captivity is in the same category as famine, drought, or exposure, and one stands in danger to one’s life. One who averts his eyes from redeeming [the captive] transgresses [the commandment], (Deut. 15:7) Do not harden your heart and shut your hand, and (Lev. 19:16) Do not stand upon the blood of your neighbor, and (Lev. 25:53) He shall not rule ruthlessly over him in your sight, and nullifies the commandment (Deut. 15:8) You must open your hand, and the commandment, (Lev. 25:36) Let him live by your side as your kinsman, and (Lev. 19:18) Love your fellow as yourself, and (Proverbs 24:11) If you refrained from rescuing those taken off to death, [those condemned to slaughter–if you say, “We knew nothing of it,” surely He who fathoms hearts will discern], and many such sayings. You cannot find a greater mitzvah than the redemption of captives.

One of the most important forms of tzedakah is money given to free the captive, according to Maimonides in the Mishneh Torah. I have already listed opportunities for gemilut hasadim, acts of kindness that do not involve cash, in Children in Cages: Things We Can Do Today.

This is a list of good places to donate where your money (however small an amount!) will make a difference for the people in detention camps:

Holly Cooper, Co-director of the Immigration Law Clinic at UC Davis, is one of the few attorney [sic] with legally mandated access to some of the worst facilities where the children are being held. Her team is doing vital work, investigating, advocating and suing to help the children. Over the weekend has already been an outpouring of support for this work, and now we can add ours too. We can click here to donate to Together Rising’s fight for the rights of children in Detention camps. Information here.

– From Rogan’s List, June 25; via Valerie Sopher at Temple Sinai

A list of links to places to donate, from Rabbi Suzanne Singer:

One thought on “Children in Cages: More Ways to Help”