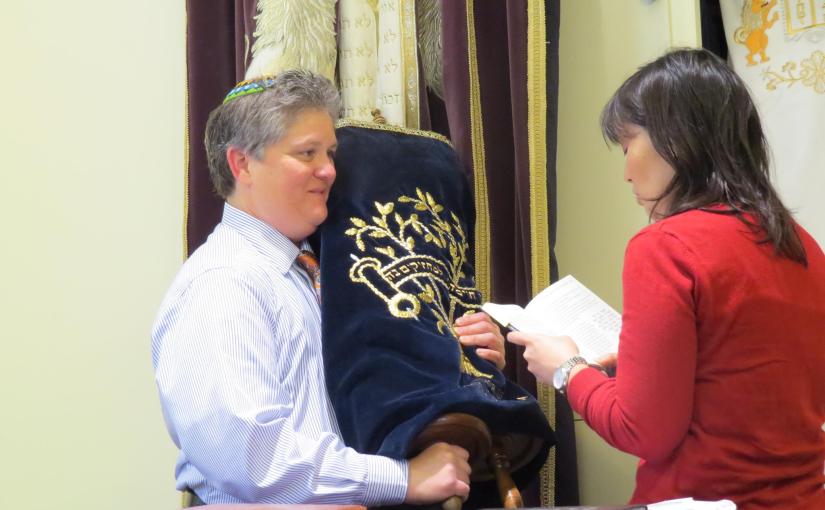 Image: A new Jew makes a commitment to a life of Torah. Photo by Linda Burnett.

Shavuot [shav-00-OHT or sh-VOO-us] is coming. Even thought it is a major Jewish holiday, only the more observant Jews will even be aware of it.

That’s a shame. It’s a beautiful holiday – and in real ways, it is the completion of the journey we began at the Passover seder. The trouble is that unlike Passover, it didn’t see as successful a transition to the new realities Jews faced after the destruction of the Temple in 70 CE.

HISTORY Shavuot combines two ancient observances: a festival for the first grain harvest of the summer and the chag, or pilgrimage holiday, celebrated in Temple times. All Jews who were able traveled to Jerusalem to observe the sacrifices and bring the first fruits of their harvests, remembering and celebrating our acceptance of the covenant at Sinai and the giving of the Ten Commandments. The drama and pageantry of the holiday made Shavuot a major event in the Jewish year.

Perhaps the most famous record of Shavout is that in the New Testament book of Acts, chapter 2. While that chapter refers to an experience of the disciples that later came to be remembered by Christians as Pentecost, one verse tells us a lot about Jerusalem during Shavuot:

Now there were staying in Jerusalem God-fearing Jews from every nation under heaven. – Acts of the Apostles 2:5

Jews from all over the known world gathered in Jerusalem for Shavuot! This tells us that:

In the Bible, the festival has three names:

OBSERVANCE TODAY Today we observe Shavuot in a number of ways: