One who embarrasses another in public, it is as if that person shed blood.

Imagine for a moment that you are in a synagogue, somewhere that every Jew should feel at home. The service is ending, and for the past several minutes your body has been sending increasingly urgent messages that you need to find a bathroom. You spot the restroom and as you place your hand on the door, three people behind you shriek “NO!!!” and everyone in earshot turns to look at you.

Just sit with that thought, with those feelings, for a moment.

A number of people I care about live with the possibility that this could happen to them at any moment, anywhere. Some are transgender, some are butch lesbians, some are straight but they don’t look stereotypically masculine or feminine.

Let me give you a clue: they are all human beings, made in the Divine Image.

A dear woman-friend of mine looks great in a suit. She dresses much better than do I. But there’s a look she gets on her face when someone has humiliated her at the door of the “ladies room” that I recognize in a heartbeat. I recognize it because I’ve seen it too many times.

I know a nice transman who dreads public bathrooms. He does everything in his power to avoid needing to use one, because no matter which one he goes to, someone may decide loudly that it’s the wrong one. He’s been lucky, no one has beaten him up. But the pain in his voice when he told me why he was visibly upset made me want to weep.

They aren’t the only ones, just two who are close enough to me that I am aware of their hurt. It doesn’t really matter what their gender is. Someone decides that they “don’t look right” and suddenly it’s open season. They look different, so it’s OK to humiliate them.

Jewish tradition tells us that we are forbidden to embarrass another person. It tells us that embarrassing another is the equivalent of shedding their blood. That commandment does not go away simply because the other person’s appearance makes us uncomfortable. I am not permitted to humiliate a human being because something about them is outside my experience.

“But what about danger?” some may ask, “What about men pretending to be trans so they can hang out in the ladies room and attack women?”

People who want to use the privacy of a bathroom to hurt other people go in there and lurk. They hide. They linger. They do not go in, pee, wash their hands, and leave. If you go into a restroom (either one) and see someone lurking, do the smart thing and LEAVE. Go tell someone with authority if you are worried. Don’t stand there and shriek. After all, if you are right and they are dangerous, they might hurt you!

Please, especially in places that should be safe for every Jew, don’t humiliate people in or out of the restroom. Embarrassing them does not make any of us safer.

If I were queen, I would put this sign up outside every restroom. Kudos to the University of Bristol’s (UB) LGBT + Society for this image: 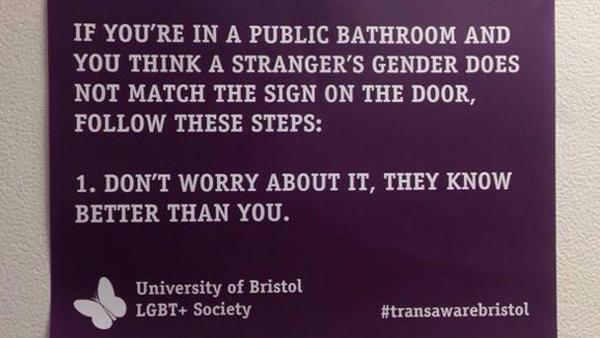 8 thoughts on “Thou Shalt Not Embarrass”